What is the light behaviour through different media?

The light travels more slowly through the transparent materials than through a vacuum, so, the light bends as it enters or leaves the glass. 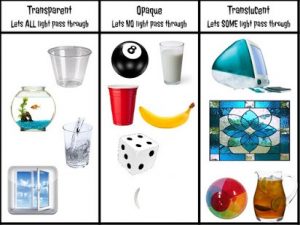 The light transmits through different media with variable degrees, So, Media can be classified according to their ability to allow the light to pass through, into transparent medium, translucent (semi-transparent) medium, and opaque medium.

The transparent medium is the medium which permits most light to pass through, the objects can be seen clearly through a transparent medium, the materials like the air, the pure water, the glass cup and the clear glass in a window are called transparent.

The materials like frosted glass and some plastics, flint glass and tissue paper are called translucent objects, when the light transmits the materials, only some of the light passes through them.

The light does not pass directly through the materials, It changes the direction many times and it is scattered as it passes through, so, we cannot see clearly through them.

Most materials are opaque, When the light strikes an opaque object none of it passes through, most of the light is either reflected by the object or absorbed and converted to heat.

The materials such as the wood, the stone, the metals, the plant leaves, the foil paper, the milk, the book, the cartoon, the human skin, and the black honey (molasses)  are opaque to visible light.

The cartoon is an opaque medium because it does not permit the light to pass through and the objects can not be seen behind it.

The nature of light waves and analysis of white light