Water is very important for the survival of all living organisms and it has several uses in Agricultural fields, Industrial fields, and Personal fields. 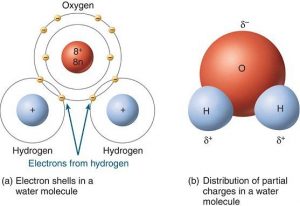 A water molecule is formed of one oxygen atom (O) with two hydrogen atoms (2H) joined together by two single covalent bonds, the angle between them is 104.5°.

Bonds between the water molecule

Between polar water molecules originate a type of weak electrostatic attraction known as hydrogen bond due to the higher electronegativity of oxygen compared with hydrogen.

Water is a good polar solvent: Fill three beakers with equal amounts of water. Put a spoon of table sugar in the first beaker, a spoon of table salt in the second, and some drops of food oil in the third with stirring, so, you will notice that both sugar and table salt dissolve in water while oil doesn’t dissolve.

Table salt dissolves in water because water is a good polar solvent for most ionic compounds (as table salt). Sugar dissolves in water although it is among covalent compounds because sugar molecules form hydrogen bonds with water molecules. Oil doesn’t dissolve in water because it is a covalent compound that cannot form hydrogen bonds with water, so it doesn’t dissolve in it.

Water density decreases on freezing: Water is not like other matters. where its density in the solid-state (ice) is lower than its density in the liquid state (water) because when the temperature of the water becomes less than 4°C, water molecules are collected together by hydrogen bonds forming large-sized hexagonal ice crystals with many spaces between them, so its volume increases and thus its density.

Although the water of oceans freezes at polar zones, the aquatic creatures are still alive, due to the formation of a layer of ice on the surface of liquid water protects the deep water from freezing which preserves the life of the marine organisms in it. On putting a glass bottle filled with water in a freezer, it breaks (explodes) because when water freezes its volume increases.

It is possible to dissolve the ice of the freezer quickly after disconnecting the electric current from the fridge in two ways: Putting a hot water container in the freezer and close the fridge. or using a hairdryer to direct a hot air current to the formed ice.

The idea of work of Hofmann’s voltameter is used for the electrolysis of acidified water. The relation between the volume of hydrogen gas and oxygen gas on electrolysis of water:

Adding few drops of dilute sulphuric acid (or sodium carbonate) to pure water during its electrolysis by Hofmann’s voltameter, to make water conduct electricity, where the pure water is a bad conductor of electricity.

The continuous increase in agricultural, industrial, and developmental activities leads to water pollution. Water pollution is the addition of any substance to the water which causes a continuous gradual change in water properties affection the health and the life of living creatures.

Water pollutants and their harms

Environmental pollutants are divided generally into two kinds, which are:

Biological pollution is due to mixing animals and human wastes with water, harms are the infection with many diseases such as bilharzia, typhoid, and hepatitis.

Chemical pollution is due to discharging factories wastes and sewage in seas, rivers, and canals. Harms: the increase in some elements concentration causing great harms as:

Thermal pollution is due to rising of the temperature of some marine zone which uses water for cooling the nuclear reactors. Damages: Destroy the marine creatures found in these zones due to the separation of the dissolved oxygen in the water.

Protection of water from pollution

There are many behaviours that must be taken into consideration to protect water from pollution in Egypt, such as: