So, God has endowed these organisms elaborate methods of defence, these methods are always changing to face the different methods of the enemy.

Immunity is the ability of the body to resist the pathogens and foreign bodies through the immune system, whether through preventing the entry of them into the body of the living organism or by attacking and destroying them when entering the body of the organism.

The immune system works according to two systems, which are:

These two immune systems work in cooperation and coordination with each other, As the innate immunity is essential for the acquired immunity to work successfully and vice versa, This correlation allows the body to act with pathogens. 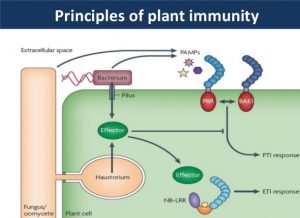 The causes of disease and death in plant

The causes of disease and death in plants are limited to three main causes, which are:

The methods of immunity in plant

The plants defend themselves against pathogens through two ways: Structural immunity and Biochemical immunity.

The plants defend themselves against pathogens through the achievement of some mechanisms through their own structures, which known as the structural immunity.

Epidermal cells of the plant surface: The epidermis acts as the first bulwark in the resistance of the pathogens, As it is characterized by the presence of some structural defences that cover the epidermis, such as:

Cell wall: It represents the outer protection of the cells, especially the epidermal layer, As it consists mainly of cellulose and after thickening by lignin becomes rigid, So, it will be difficult to be penetrated by the pathogens.

Cork formation: The cork layers are formed to isolate the plant areas exposed to cut or tear, which prevent the entry of the pathogen to plant.

Causes of cutting or tearing areas in the plant:

Formation of tyloses: Tyloses are overgrowths of the protoplast of adjacent living parenchymatous cells which protrude into xylem vessels and tracheids through pits, Tyloses are formed as a result of exposure of the vascular system to cut or invasion of pathogens, They obstruct the movement of pathogens to the other parts of the plant.

Deposition of gums: The infected plants by wounds or cuttings secrete the gum within the cells surrounding the locus of infection to prevent the entry of microbes inside the plant through the cutting or tearing parts.

Cellular immune structures: They are some morphological changes that occur as a result of the pathogens invasion.

Inducible post-infection: Some plants promote and strengthen their defences after the infection, in order to protect themselves from any new infection by the presence of chemical compounds that are formed after infection.

From the previous, we can compare between Structural immunity and Biochemical immunity.

Natural barriers (structures) that act as the first line of defence to prevent the pathogens from entering and spreading inside the plant, It includes two types, which are:

Responses of the plant to secrete chemical compounds against pathogens, It includes many mechanisms, which are:

The role of human in protecting the plant against the pathogens:

Due to the importance of the plants to human, so, the human uses methods and introduces means to protect the plant from diseases, such as:

The activation compounds of protection and resistance can transfer from one cell to another in a regular manner through the transport system in the plant which corresponds to the blood vessels in animals.