The suitable female age for pregnancy ranges between 18 : 35 year, If the age decreases or exceeds that range, both the mother & embryo will be subjected to serious problems and the possibilities to produce deformed babies will increase, on the other hand, if the father is too old, the same results will occur to his babies, The period of pregnancy differs according to the species of organism as follows: sheep → 150 days,  mouse → 21 days & man → 270 day.

In the ninth month: The placenta dissociates gradually and the secretion of progesterone hormone decreases, The attachment between the fetus and uterus becomes loose (preparing for the birth), The labour begins with a series of uterine contractions, therefore the fetus is expelled outside.

After the fetus is expelled outside the following takes place: The baby starts his life with a distinct cry which stimulates his respiratory system to work, The placenta separates from the uterine wall and expelled outside the body, The umbilical cord is cut from the baby side and the food of the newborn changes to the mother’s milk.

Lactation starts with a hormonal stimulation from the pituitary gland to the mammary glands of the mother breast to secrete the milk (which is considered as the most valuable nutritive and emotional supply), Mothers’s milk protects the embryo from many somatic and psychic diseases not in his childhood only, but in his future too, where the pituitary gland secretes:

Usually, one body is born in each birth, but sometimes multiple births take place, reaching six babies in the same birth, The most common is the twins, where the international percentage of twins is once to about 86 individual births, while the multiple births are rare.

There are two types of twins which are Fraternal (Dizygotic) twins and Identical (Monozygotic) twins, Siamese twins are twins which may be born partially attached to each other at some places of the body which can be separated surgically in most cases. 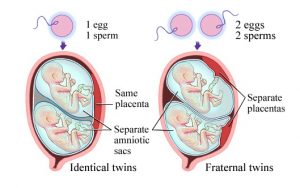 Results from the liberation of two mature ova (from one ovary or both ovaries) at the same time, The two ova are fertilized with two sperms separately, Each embryo has a separated placenta in the uterus & its own embryonic sac.

The two embryos carry different genes, therefore: They have different genetic characters (they never exceed brothers of the same age) and they may differ in the sex.

Results from the fertilization of one ovum by a single sperm, The zygote divides into two masses of cells, where each of which forms an embryo independently, The two embryos share one embryonic sac and mostly one placenta, They carry the same genes, therefore: They are identical in all the genetic characters and they are the same sex.

There are several problems that related to childbearing which are:

The most important methods to solve these problems:

Several contraceptive methods are used in birth control such as The pills, The intrauterine device (coil), Condom and Surgical sterilization.

The pills: Woman start using them after the end of menstruation and continue for 3 weeks, They contain a combination of synthetic hormones that are similar to oestrogen and progesterone hormones, They inhibit the ovulation, So, they prevent pregnancy.

The intrauterine device (coil) is inserted into the lumen of the uterus to prevent the fertilized ovum from being implanted in the endometrium, Condom is used by male and prevents the sperms from entering the vagina.

A mature ovum is separated from the wife’s ovary and fertilized it externally by a sperm from the husband’s semen inside a test tube, The fertilized ovum is kept in a suitable nutritive medium, till it reaches the morula stage, Then the morula is re-implanted in the wife’s uterus to complete its embryonic development till birth.

Renucleation experiments have been carried out on frogs and mice, In the experiment of frog: Nuclei of amphibian (toad) embryonic cells at different stages of development were removed, These nuclei were transplanted into an unfertilized amphibian (toad) ova whose nuclei had been removed or destroyed by radiation previously.

Each of these ova starts to develop normally into individuals that are identical in their characters to the individual from which the cultured nuclei were taken, This proves that the early embryonic cell nuclei (cultured nuclei) are capable to direct the embryonic development in a manner similar to that of the zygote nucleus itself.

Gametes banks are found in some European and American countries, These banks are used to store the selected animal gametes, especially those of cattle and horses to:

Keep them available for reproduction till the time of need, The gametes of these animals are stored in a frozen condition (− 120°) for a period reaches up to 20 year, After that period, they can be used in the artificial fertilization, even after the death of the producer individuals or if some rare animal species are exposed to extinction.

Some people desire to store their gametes in such banks to ensure the continuity of their generations, even after their death with several years, there is a question here: Could such techniques succeed in the case of the human?