Structure of the lymphatic system in human 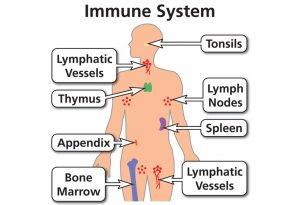 They contain large numbers of lymphocytes, Maturation and differentiation of lymphocytes take place in them, From the important lymphoid organs:

Site: a tissue found inside:

Site: located on the trachea above the heart and behind the sternum bone.

Function: secretes the thymosin hormone that stimulates the maturity of lymphoid stem cells to T-cells and their differentiation into different types inside the thymus gland.

They are two specialized lymphoid glands, They are located on both sides of the rear portion of the mouth, They pick up any microbe or foreign body that may enter with food or air and prevent its entry into the body, so, they work to protect the body.

It is a small lymphoid organ, its size is not more than the fist and its colour is dark red, It is located in the upper left side of the abdominal, It plays an important role in the body’s immunity since it has a lot of:

They are small lymphoid cells that accumulate in the form of masses or aggregations, They spread in the mucous membrane lining the lower part of the small intestine, their full function is unknown, but they play a role in the immune response against the pathogenic microorganisms that enter the intestine and cause the diseases.

Their size ranges from a pinhead to the seed of small beans, They present along with the network of lymphatic vessels that located in all the body parts, as:

The node is divided internally into pockets filled with:

Each lymph node is connected with several lymphatic vessels that transfer the lymph from the tissue to the nodes to filterate the lymph and get rid of the suspended foreign pathogen away from the body, They purify the lymph from any harmful substances or microbes, They store the white blood cells (lymphocytes) that help in fighting against any disease or infection.

They from about 20: 30 % of the white blood cells in the blood, All lymphocytes are formed in the red bone marrow, At the beginning, they do not have any immune ability, but they pass in the process of maturation and differentiation in the lymphoid organs, after that they change into cells that have the ability of immunization.

They revolve in the blood to search for any microbe or foreign body, using their defence and immune mechanisms to get rid of the pathogenic microbes that try to invade the body, reproduce and spread in it, sabotage its tissues and disruption of its vital physiological functions, There are three types of lymphocytes in the blood , which are B-cells, T-cells and Natural killer cells (N K).

They form about 10: 15 % of lymphocytes in the blood, They are formed and matured in the red bone marrow, They identify any microbes or foreign materials (such as bacteria or viruses), then adhere to these foreign materials and produce the antibodies for these materials to destroy them.

They form about 80% of lymphocytes in the blood, They are formed in the red bone marrow and matured in the thymus gland, They are differentiate into three types, which are:

They form about 5: 10 % of lymphocytes in the blood, They are formed and matured in the red bone marrow, They attack the infected cells with viruses and carcinogenic cells to kill them through their enzymes secretion.

Basal cells, Acidic cells and Neutral cells: struggle the infection, especially the bacterial infection and inflammations, because their granules disintegrate pathogen’s cells attacking the body, They ingest and digest the pathogens (phagocytosis).

Basophils, neutrophils and eosinophils are still in the blood circulation for a relatively short period ranging from several hours to several days, They are distinguishable by their size, the shape of nucleus and the colour of granules appeared inside them under the microscope.

Types: macrophages include two types, which are:

They are chemicals that help and cooperate with the specialized mechanisms of the immune system, They are many chemicals, as follows:

Antibodies are specific proteins known as immunoglobulins (lg) and they are Y-shaped, They circulate in the blood and lymph of human and other vertebrates, They are produced by antibody-secreting plasma B-cells, There are five types, which are: IgM, IgA, IgG, IgE, IgD.

Antibodies and complements adhere with the foreign bodies (as bacterial cells) to offer them to the other white blood cells for engulfing and destroying them, Lymph is a filtered fluid from the blood plasma during its passing through the blood capillaries, Lymph contains nearly most of the plasma constituents, in addition to a large number of leucocytes.

How they are formed:

The binding between an antigen and its specific antibody at these sites resembles the lock and its key, which is a mirror image of a specific antigen and this binding forms an antigen-antibody complex, Constant region “c” has a constant shape and structure in all types of antibodies.

Antibodies have only two antigen-binding sites, while antigens have many binding sites which make a confirmative certain binding between the antibodies and their antigens, Antibodies stop the action of antigen by using one of the following mechanisms:

The most important functions of antibodies in resisting viruses are neutralizing these viruses and stopping their activity by:

Some antibodies such as IgM have many antigen-binding sites which enable each of them to bind to more than one microbe (antigen) and this leads to the clumping of microbes on the same antibody, this makes them weaker and liable to be engulfed by phagocytes.

This happens in soluble antigens in which the binding between antibodies and these antigens leads to the formation of insoluble antigen-antibody complexes which form a precipitate to facilitate their engulfing by phagocytes (stimulation of phagocytosis).

The binding between antibodies and antigens activate specific proteins and enzymes called complements, These complements lyse the coats of antigens and dissolve their contents to make them easily engulfed by phagocytes.

Antibodies can bind to toxins and form complexes of antibodies and toxins, These complexes activate the complements to react with them in a chain reaction which leads finally to detoxifying them and also makes them readily engulfed by phagocytes.

Natural (Non-specific or innate) immunity, How does human body protect itself from pathogen?