After the advances in knowing the gene structure and how protein is synthesized, It is possible now to isolate the desired gene and form million copies of it inside the cells of bacteria or yeasts, It is possible to produce short strands of DNA with any desired sequence of nucleotides in many laboratories which are now equipped with “gene machines” that can be programmed.

It is possible to transfer functioning genes from cells to other cells of plants or animals, We can synthesize DNA molecules by order, as in 1979, the scientist Khorana produced an artificial gene and introduced it into a laboratory culture of bacteria.

It is possible to use the artificial DNA in the protein synthesis experiments, we can determine how the amino acids affect the function of the protein as a whole by changing the code to eliminate a particular amino acid (or replace it) from the protein.

Techniques of the molecular technology 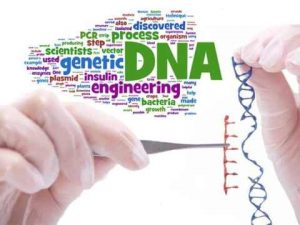 How to form a hybrid DNA

Steps of the production of hybrid DNA double helix:

Uses of the hybrid DNA

The hybrid DNA is used to determine whether a particular gene is present in its genome and in what amount of a sample, as follows:

It was believed that viruses can invade certain strains of E.coli bacteria which are restricted to these strains, Scientists proposed that these viruses can’t grow inside other strains of bacteria, as the resistant strains of bacteria produce enzymes that recognize specific nucleotides sequences on the viral DNA and break the DNA into useless fragments, These enzymes are called “restriction endonucleases”.

Restriction endonucleases are bacterial enzymes that recognize specific nucleotides sequences on the viral DNA and break the DNA into useless fragments, It was found that the restriction enzymes are spread in microorganisms, where about more than 250 kinds of these enzymes are isolated from different strains of bacteria.

Why don’t these enzymes destroy the bacterium’s own DNA?

Mechanism of the restriction enzymes

Each restriction enzyme recognizes a specific sequence of four to seven nucleotides in DNA strands which is known as “recognition site”.

Recognition site is a specific sequence of four to seven nucleotides on DNA strands which can be recognized by the restriction enzymes, then the enzyme cuts the molecule of DNA at or near this site and the sequence of nitrogenous bases on one strand is the same on the other strand (5‾ → 3‾).

Importance of the restriction enzymes

Restriction endonucleases provide a way to cut the DNA molecule into pieces with known nucleotides at their ends, Many of them also produce staggered cut ends in which the double helix is left with two single-stranded ends called “sticky ends”.

Because they will base-pair with any other single-stranded staggered ends that are produced by the same restriction endonuclease, and the cut ends can then be joined into a single strand by DNA-ligase enzyme, In this way, researches can splice a specific section of DNA molecule into another DNA molecule.