The cell cycle is the alternation between interphase and mitosis that occurs through a regulated sequence of events to control cell growth, function, and division. Most cells undergo repeated cell cycles, each is divided into 2 major events:

This is the stage between two successive cell divisions. All human somatic cells in the interphase have 46 chromosomes (22 pairs of autosomes + 1 pair of sex chromosomes). Each pair is formed of two homologous chromosomes one coming from the father and the other from the mother. 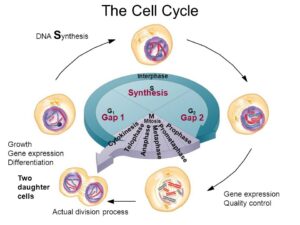 Most cells of multicellular organisms differentiate to carry out specialized functions and no longer divide. Such cells are considered to be outside the cycle in the Go phase which is not necessarily permanent. Go cells may reenter the cell cycle in response to a variety of stimuli.

Accordingly, there are two forms of chromosomes present in a cell along with its cell cycle:

Regulation of the cell cycle

There are five major types of checkpoints

The restriction checkpoint is the most important checkpoint in the cell cycle. It occurs in the G1 phase and is sensitive to the size of the cell and to its interactions with the surrounding extracellular matrix. Cells that do not receive appropriate growth stimuli from their environment do not progress past this point (G1 phase) and will be eliminated by apoptosis.

DNA damage checkpoints occur in G1, S, and G2 phases of the cell cycle. These checkpoints block cell cycle progression until the repair of the damaged DNA or cell apoptosis occurs.

The unreplicated DNA checkpoint in the G2 phase. This prevents the progression of the cycle into the M phase before the complete synthesis of DNA.

The spindle assembly checkpoint (the metaphase checkpoint) occurs in mitosis. It prevents premature entry into anaphase until all chromosomes have attached properly to the mitotic spindle.

The chromosome-segregation checkpoint prevents the process of cytokinesis until all of the chromosomes have been correctly separated.