Cell polarity is a main feature of many types of cells, The epithelial cell has an apical, basal, and lateral surfaces; meaning that cell regions near each surface exhibit special structural modifications to carry out specific functions. Epithelial cells can connect to one another via their lateral membranes to form the epithelial sheets that line the cavities & surfaces throughout the animal body.

Epithelial cells are one example of the polarized cell type, featuring distinct ‘apical’, ‘lateral’ & ‘basal’ plasma membrane domains. Every plasma membrane domain contains a distinct protein composition, giving them distinct properties & allowing directional transport of molecules across the epithelial sheet. Many molecules are located at the apical membrane, but only a few key molecules act as determinants that are required to maintain the identity of the apical membrane and, thus, epithelial polarity. 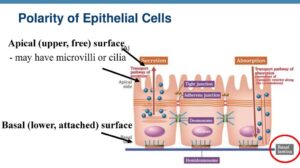 The apical surface of the epithelial cell is the upper free surface exposed to the body exterior or the cavity of an internal organ, the structural modifications in the apical domain include:

Microvilli: these are non-motile cytoplasmic projections that arise from the apical surface of most epithelial cells as finger-like evaginations; they contain a core of actin filaments. they increase the surface area for fluid absorption, they are present mainly in the absorptive columnar cells of the intestine and kidney tubules.

Stereocilia are long, branching microvilli found mainly in the non-ciliated pseudostratified columnar epithelium of the male genital ducts e.g. the epididymis, and they increase the surface area for fluid absorption.

Cilia and flagella: these are generally-motile cytoplasmic projections that extend from the cell surface. Cilia are longer than microvilli. Flagella resemble cilia in structure but they are much longer and are single per cell e.g. flagellum of the spermatozoon.

Histological structure of cilia: by EM, each cilium is formed of a basal body, a shaft, and rootlets.

Clinical hint: Abnormal proteins of cilia or flagella resulting from mutation are responsible for the immotile cilia syndrome, the symptoms are:

The structural modifications in the basal domain include basal infoldings, the basement membrane, and cell-to-matrix junction.

Function of the basement membrane

The structural modifications In the lateral domain include: