The cell is the basic unit of structure of living organisms 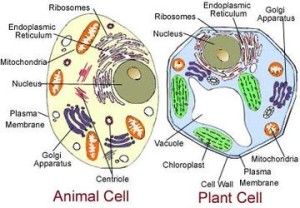 The animal cell and the plant cell

The animal cell is the building unit of the animal body, The body of animals or humans is made up of a group of systems (such as the digestive system, the respiratory system, the circulatory system, ……..) that work integrally to keep the living organisms alive.

These systems are made up of organs such as the roots, the stems, and the leaves, Each organ in the plant is made up of tissues, and each tissue is made up of similar units called cells.