Observation: Increasing the mass of substance at the cathode by increasing of quantity of electricity passed in solution, we find that m ∝ Q.

Conclusion: the quantity of material formed or consumed at any electrode is directly proportional to the quantity of electricity that passes in the electrolytic (solution or molten) that is called Faraday’s First law. 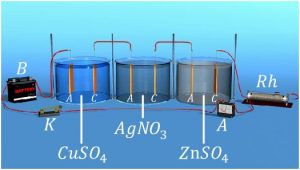 The masses of the different materials formed or consumed by the same amount of electricity that passes in different electrolytes connected in series are proportional to their equivalent masses, Mass ∝ Equivalent weight.

Pass the same quantity of electricity in different groups of solutions (silver nitrate, copper (II) sulphate and aluminum chloride), Record the masses formed at the cathode, Compare between the ratio of masses of each cell and the ratio of their equivalent masses.

Observation: The masses of the formed materials at the cathode in the cells of aluminum, copper, silver, respectively are proportional to their equivalent masses.

The equality of electricity in Coulomb that passed equal the result of multiplication of current intensity that used (in ampere) by the time (in seconds) through which the current passed.

The relation between the quantity of electricity and equivalent weight

Practically one coulomb will result in precipitating 0.001118 gram of silver from a solution of silver ions (monovalent).

The general law of electrolysis: when one Faraday ( 1 F ) (96500 C) passes through an electrolyte, this will lead to dissolution or evolution or deposition of gram equivalent mass of the substance of any electrode.

The number of Faraday’s required to precipitate one gm atom of the metal is the number of charges (oxidation number).

Applications of electrolysis, Electroplating, Purification of metals & Extraction of aluminum from bauxite