Formation of the solution & factors affecting the solubility process

Your blood is a mixture of elements and components because it contains white blood cells , red blood cells , water and number of dissolved substances , The different components of blood can be separated and used by doctors , The ratio of these substances in your blood changes daily , but the identity of the mixture does not change . 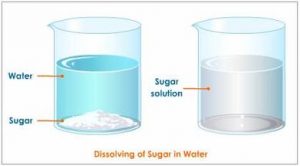 Formation of the solution

The solution consists of solvent and solute , Solvent is the substance in which solute disperses or dissolves such as water , alcohol , benzene , …etc. , Solute is the substance which dissolves in a solvent such as salt , sugar , ….etc. , The solubility ( dissolving ) of a solute in a solvent produces solution , Water is called a common solvent as thousands of substances dissolve in it .

Solution is a homogeneous mixture in which the solute breaks down into its most basic particles that spread throughout the solvent , such as a salty solution , apple juice and tea .

The salty solution consists of a solute which is salt and a solvent which is water , Stirring process is necessary to dissolve the solute in the solvent .

Suspension is a heterogeneous mixture in which some particles of the solute are suspended throughout the solvent , such as mud in water and natural orange juice , Suspension can be separated by filtration process .

The solubility process is affected by four factors which are :

Types of mixtures and solutions

The properties of Suspensions and Colloids