What is Valency? Valencies of some metallic, nonmetallic elements & atomic groups

The valencies of some metallic elements

There are some metallic elements have more than one valency:

The valencies of some nonmetallic elements

Some nonmetallic elements which have more than one valency such as: 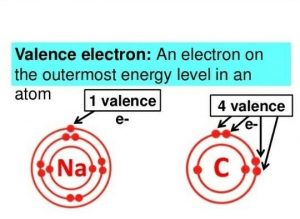 The atomic group (Radical) is a set of atoms of different elements joined together and behave like one atom during a chemical reaction, having its own valency and doesn’t exist solely (individually), the valency of an atomic group equals the number of charges which it carries.

The valencies of some atomic groups

Compound molecules are formed as a result of a combination of atoms of different elements together. We can express a molecule of a chemical compound via a certain formula known as a chemical formula. the chemical formula is a formula that represents the number and the type of the atoms in a molecule.

How can you write a chemical formula for a compound?

Both sodium (11Na) and chlorine (17Cl) are monovalent although they have different atomic numbers because, during chemical reactions, sodium atom loses one electron, while chlorine atom gains or shares with one electron to complete their outermost shell.

The valency of noble gases is zero because their outermost energy levels are completely filled with electrons, so, they don’t lose, gain or share with any electrons. An oxygen atom joins two atoms of sodium when composing one molecule of sodium oxide because oxygen is divalent, while sodium is monovalent.

How can you calculate the valency of each element?