The movement of electrons around the nucleus and the energy levels

The movement of electrons

The electrons are negatively (- ve) charged particles, They revolve around the nucleus with very high speed, The electron has a negligible mass relative to that of the proton or the neutron, so the mass of the atom is concentrated in the nucleus.

The number of the negative electrons which revolve around the nucleus is equal to the number of positive protons in the nucleus, so the atom is electrically neutral in its ordinary state.

What are the energy levels? 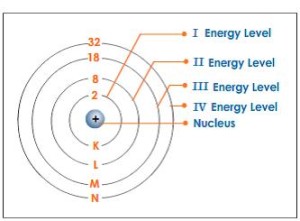 The arrangement of electrons in an atom.

The maximum number of energy levels is seven levels (in the heaviest atoms) which are arranged from the nucleus according to their energies.

Each level has a certain amount of energy increases by the increase of the distance from the nucleus, the first energy level (K) has the least energy followed by the second level (L) and so on.

The electron is not transferred from one level to a higher one unless it gains some energy called the quantum which equals the difference between the energies of two levels and the atom will be excited atom.

The electrons lose this energy, it returns to its original level and the state of the atom is the ground state.

The excited atom is the atom that gains a quantum of energy, and the quantum is the amount of energy lost or gained by an electron when it transfers from one energy level to another.