Avogadro’s Number is a fixed number (6.02 × 1023), and It is used to define the number of atoms, molecules, ions, and particles that are present in one mole of a substance (an element or a compound), Mass one mole of atoms is the atomic mass expressed in grams which contains Avogadro’s number of atoms.

How can you calculate the number of Moles

The molar mass is the sum of atomic masses of the elements in the covalent compounds or that of the formula unit in ionic compounds expressed in (g/mol), The mass of the atom is very small and can’t be experimentally measured, It is impossible to determine the mass of the atom by grams, a large number of atoms can be measured in grams.

Mass one mole of molecules is the molecular mass expressed in grams for (element or compound) which contains Avogadro’s number of molecules, Ionic compounds and polar covalent compounds dissolve in the polar solvent as water and converts into ions, where each ion is surrounded by a number of water molecules. 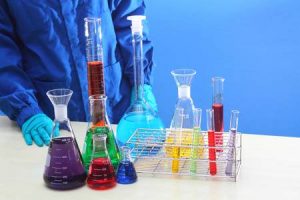 One mole of any gas occupies volume = 22.4 liter at S.T.P. and this volume is called gm-molecular volume.

Gay Lussac’s law: The volumes of the reactant gases and produced gases are in a fixed ratio, S.T.P. means standard temperature and pressure.

Avogadro’s law: Equal volumes of different gases contain the same number of molecules under the same temperature and pressure, the volume of 1 mole of any gas occupies 22.4 liter and contain 6.02 × 1023 molecules.

Volatilization method is a type of gravimetric analysis which is based on the volatilization of the element or compound to be determined followed by its measurement, either by collecting the volatile material and determining its mass or by measuring the amount lost from the original mass of the substance.

Standard Solution (molar solution) is a solution its concentration is known, knowing the mass of the substance which dissolves in a certain volume of the solution, The standard solutions which are used in the titration processes differ according to the reaction type which takes place between the solutions of two substances, these reactions may be:

Oxidation-reduction reactions: The reaction in which the oxidation numbers of some reactants change, and the standard solution acts as an oxidizing agent as potassium dichromate or a reducing agent as iron (II) sulphate.

Precipitation reactions: The reaction in which the ions combine with each other (except H+, OH− ions) to give sparingly soluble compounds in water (ppt).

Indicators are chemical substances which change their colours in the reaction medium which are used to detect the end-point of reaction, Indicators are weak organic acids or alkalis that have different colours depending on the medium of the reaction either acidic or alkaline or neutral, and it is used to indicate the endpoint during titration.