Ethanol is very important as a fuel & in chemical industries, High taxes are paid for the production of alcohol (96%), because it is used in alcoholic liquors which has a harmful effect on health, Some additives are added to ethanol to be used as fuel & it is sold at a low price, These additives can’t be easily separated from alcohol except with very complicated chemical process, besides it is illegal.

Functional group is an atom or atomic group which is responsible for the physical & chemical properties of the organic compounds, Organic compounds were classified into groups, each one is characterized by a certain function group, Hydrocarbon derivatives consist of C, H and O such as Alcohols, Phenols, Ethers, Aldehydes, Ketones and Esters.

Hydrocarbon derivatives consist of C, H and N such as Amines, (−COOH) group is named carboxylic group because it is composed of carbonyl group and hydroxyl group, The functional or the characteristics group is a group of atoms which combine together by a certain way to form a part of the molecule, However, its activity overcomes all the other properties of the whole molecule. 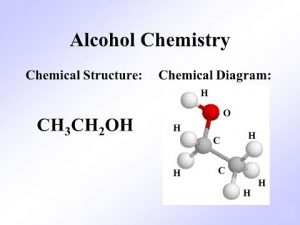 The nomenclature according to IUPAC: The name of alcohol is derived from the name of the corresponding alkane (alkane which contains the same number of carbon atoms) then adding the suffix (ol) instead of (e) such as CH3OH methanol, C2H5OH ethanol, in this system, the carbon chain is numbered from the nearest end to the hydroxyl group (OH), From pentane we can derive 3 different isomeric alcohols.

Alcohols are classified according to the number of hydroxyl groups (OH) in the alcohol molecule into four types:

Ethanol (Ethyl alcohol) is considered the oldest organic compound prepared in industry, Ancient Egyptians prepared alcohol before 3000 years ago by the fermentation process of sugar materials and starch.

Methods of preparation of Ethanol (in industry)

Fermentation of sugary substance and starch (Conc. 96%): 20% of ethanol is produced all over the world by alcoholic fermentation process of starch and sugar materials especially countries which are rich in the cultivating of sugar-cane, beet and maize, Alcoholic fermentation is the addition of yeast fungus to molasses (sucrose) to form ethanol.

In Egypt, Ethanol is prepared from molasses (sucrose) ( in the Egyptian Sugar, Distillation Company in Howamdeia), The fermentation process takes place by the addition of yeast to molasses (sucrose) where ethanol and carbon dioxide gas are formed as follows:

Hydration is the addition of water to ethene in the presence of phosphoric or sulphuric acid, Ethene is the only alkene which gives primary alcohol by catalytic hydration, while the other alkenes give secondary or tertiary alcohols (Markownikoff’s rule).

The converted alcohol (or red spirit)

It is 85% ethanol of 96% concentration mixed with 5% methanol which is a poisonous substance that causes madness & blindness to prevent its use as a drink, pyridine, and bone oil (bad smell substance to prevent its use in perfumes) and dyes to use it in painting wood and it is used as a fuel.

Pure ethanol of 96% concentration is expensive because of the high production tax which should be paid for it, This is imposed to minimize its use in making alcoholic liquors because of their harmful effect on health and social aspects, However, ethanol is very important as fuel and in the chemical industries and organic solvents.

The converted alcohol (red spirit) is the ethanol with the additives of poisonous methanol, pyridine (bad odour), coloured dyes and water to be used as fuel, It is composed of 85% Ethanol (96% conc. + 5% methanol +1% ( pyridine, bone oil, or dyes) and the rest is water).

Alcohols can be prepared by heating the alkyl halides with the aqueous solution of strong alkalies, where the halide radical is replaced by the hydroxyl group and the corresponding alcohol is formed.

Replacement of halogen by hydroxyl group is slow and this reaction is reversible, In the hydrolysis of alkyl halides, aqueous alkalies should be added to increase the rate of hydrolysis and neutralize the acid formed (HX) and prevent the reversible reaction.

All types of alcohols may be prepared by this method by using the corresponding alkyl halide, Halides may be arranged in the following sequence according to the ease of displacement, Hydrolysis of alkyl halides depend on the nature of halogen as Chlorides < bromides < iodides.

Alkyl iodide is preferred alkyl halide used to obtain alcohols by means of hydrolysis in alkaline medium because (Cl, Br and I) are in the same group and the atomic radius of iodine is the largest one which is easily separated.

General properties of Benzene, How the detergents remove spots and dirties