Matter is composed of atoms , These atoms show the physical and chemical properties of the matter , By the end of the nineteenth century , Scientists had become sure that electrons are from the main components of atoms , Electrons are negatively charged particles of a very small mass .

According to the experiment of Rutherford in 1911 and Bohr’s theory in 1913 , the atomic structure became more acceptable .

A heavy nucleus carries a positive charge in the centre of atom , Negative electrons rotate around the nucleus at a relatively far distance , Most of the atomic volume is space , The nucleus’s diameter = 10−6 : 10−5 nm , while the atom’s diameter = 1 × 10−10 m ( 0.1 nm ) , The mass of the atom is concentrated in the nucleus . 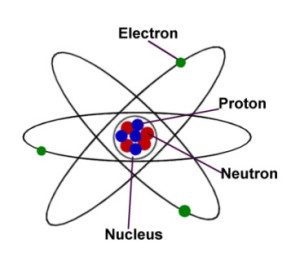 The negatively charged electrons rotate around the nucleus in certain fixed orbits called energy levels , Each energy level is occupied by a certain number of electrons that can’t be increased .

Rutherford proved in 1919 that the nucleus of atom contains positively charged particles called protons , where the mass of proton is larger than that of the electron by 1800 times approximately .

Nevil Sidgwick discovered in 1932 that the nucleus contains particles that neutrally charged called neutrons , where the mass of neutron is nearly similar to the mass of proton .

Isotopes are the atoms of the same element that have the same atomic number ( Z ) , but differ in mass number ( A ) due to the difference in the number of neutrons inside their nuclei .

The isotopes have the same chemical properties because they have similar number of electrons and the same electron configuration around the nucleus , Most elements in the periodic table have more than one isotope .

Oxygen element has three isotopes which are Oxygen-18 , ‏Oxygen-16 , ‏Oxygen-17 , In nuclear chemistry , other nuclear terminology is used in addition to the isotopes , which are :

Relationship between mass and energy

Calculation of the produced energy from the transforming of a mass of a substance ( estimated in atomic mass unit u ) to energy ( estimated in million electron volt unit MeV ) .