General properties of Benzene, How the detergents remove spots and dirties

Aromatic Benzene is used as an organic solvent for fats in dry cleaning, It is used in the manufacture of dyes, explosives and drugs, It is used in the manufacture of insecticides as gamixane, D.D.T. was used as insecticide & it was prevented in many developed countries, TNT is used as an explosive compound, The aromatic sulphonic acid compounds are used mainly in the detergent industry.

The name of mono-substituted benzene is derived from the name of the atom or the group which is attached to benzene ring followed by the word benzene, The entering atom or group attacks any carbon atom of benzene since the six carbon atoms in benzene ring are identical.

If benzene is trisubstituted, it is impossible to use the expression Ortho, Meta and Para, The carbon atoms in the ring take the numbers where each carbon atom attached to a group or atom takes the same number, the nomenclature is arranged according to alphabetical letter, for example, the bromine takes a number before chlorine before nitro group and so on and the sum of numbers must be the lowest.

Nomenclature by the IUPAC system, Direction of numbering to obtain the lower numbers, Arrange the branches alphabetically, Consider only the numbering of benzene, Aryl radical (Ar) is the radical which produce by removing one hydrogen atom from the aromatic compound (its symbol is Ar), for example when we remove a hydrogen atom from benzene, the produced radical is called phenyl radical (C6H5−).

The entering atom or the group attacks any carbon atom of benzene since the six carbon atoms in the benzene ring are identical, The disubstituted benzene is represented by three isomers, They are Ortho (O−), Meta (m−) and Para (p−), The product depends on the nature of the substituted group which is mainly found (A), There are some groups direct the new substituent to Ortho and Para positions and other direct to Meta positions.

Addition of hydrogen (Hydrogenation): Benzene reacts with hydrogen under pressure and temperature, in the presence of a catalyst to give cyclohexane.

Hydrogenation in indirect sunlight: One or more hydrogen atoms in the benzene ring can be replaced by the halogen in the presence of a catalyst, So one product is formed starting from monochloro to six benzene chloride.

In the previous reaction, One hydrogen atom is replaced by one chlorine atom, when chlorine reacts with benzene in indirect sunlight in the presence of iron III chloride as a catalyst to form chlorobenzene.

Aryl halides are produced in large scale and are used as insecticides, the most important one is D.D.T. which is dichloro, diphenyl, trichloroethane (C14H9Cl5), Its poisonous effect is due to the presence of the group (CH−CCl3) which dissolves in the fatty tissue of the insect and kill it.

D.D.T. was manufactured in 1939 before the second World War, It was used in a great extent because of its severe poison on all kinds of insects which affect the plant and the animal and even the insects that affected soldiers during the war.

D.D.T. was called the ugliest compound in the history of chemistry for its environmental problems which appeared during its usage, It remains in the environment without decaying, killing the useful insects as the bees.

Besides, it goes with rains to the rivers and lakes and kills fish and other aquatic creatures, it drains to food chain until it reached the man, that is why it was prevented in many developed countries, but it is still used in other countries.

Alkylation (Friedel-Craft’s reaction): Benzene reacts with alkyl halides (RX) where the hydrogen atom of benzene ring is replaced by an alkyl group forming alkyl benzene, this reaction takes place in the presence of anhydrous aluminium chloride (AlCl3) as a catalyst.

Friedel-Craft’s reaction (Formation of toluene) is the reaction of benzene with methyl chloride in the presence of a catalyst to produce toluene (methyl benzene), The catalyst may be (AlCl3, FeCl3, ZnCl2), and toluene can be prepared by catalytic reformation of heptane. 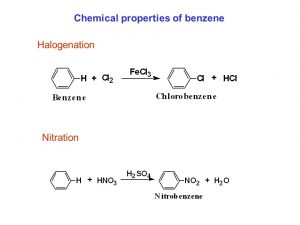 Nitration: The reaction of benzene with conc. nitric acid in the presence of conc. sulpheric acid, where the hydrogen atom of benzene ring is replaced by a nitro group (−NO2), nitro benzene is formed, The role H2SO4 is to absorb water and prevent the reversible reaction.

Polynitro organic compounds are very explosive substances because their molecules contain their own fuel, which is carbon besides oxygen which is the oxidizing agent, these compounds burn rapidly, and a great amount of heat and gases are produced accompanied by explosion, and this due to the weakness of the bond between N and O (N−O) to form the two strong bonds between C and O (C−O) in carbon dioxide and the bond between nitrogen atoms (N−N) in nitrogen molecule.

T.N.T (Trinitrotoluene) is one of the explosive nitro-organic compounds that was produced by millions of tons through the second world war, and still produced until now, this compound is prepared by the reaction between toluene and the mixture of concentrated nitric & sulphuric acids (1:1 ratio).

Sulphonation is the process in which the hydrogen atom of benzene ring is replaced by sulphonic acid group (SO3H), this usually takes place by the reaction between aromatic benzene and conc. sulphuric acid where benzene sulphonic acid is formed.

The detergent industries depend on the aromatic sulphonic acid compounds after the treatment with the caustic soda to obtain the water-soluble sodium salt, The molecule of detergent is composed of two parts: Head (polar) is an ionic group which is hydrophilic and Tail (Non-polar) is a long carbon chain which is hydrophobic.

The head of the detergent molecule is hydrophilic as it is an ionized group, so, it is attracted to the polar water molecules, Aromatic sulphonic acid compounds are important organic compounds which are used mainly in the manufacture of detergents.

How the detergents remove the spots and dirties

Pure water does not remove dirties because grease which is saturated with dirties is insoluble in water because they are organic where water is polar compound, so soapless detergents are used, this may explain the role of soapless detergent in removing the spots and dirties as follows:

Cycloalkanes, Aromatic hydrocarbons, Preparation of benzene in industry and lab