Nanotechnology & Why is the behavior of matter unique on the Nano scale?

It is the technology of very small substances and it specializes in treating the substances on the Nanoscale to produce the resultants with new, useful and unique properties, Nanoscale is the scale of the extremely small particles of less than 100 nm.

Nanotechnology is a term of two words, Nano is derived from the Greek word ” Nanos ” that means Dwarf or very small, while Technology means the application of knowledge in a certain field.

Critical Nano volume is the volume in which the unique Nano properties of the substance appear and it is less than 100 nm, Macro can be seen by a naked eye (> 1 mm), Micro can be seen under a microscope (100: 1000 μm). 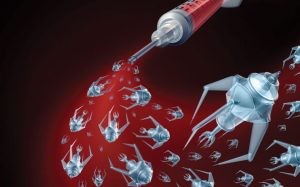 There are some derived words from the SI basic units that differ from each other by powers of ten, These derived words are called SI prefixes and the following table shows some of SI Prefixes. 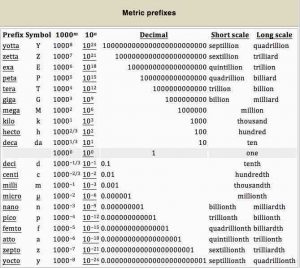 Nano is an SI prefix and it equals one part per billion (0.000000001) from the basic unit, Nanometer is used as a measuring unit for very minute particles like the atoms and molecules.

The relation between the milli, the micro & the nano

The change of Gold colour on changing its volume from macro-scale into Nanoscale because the reaction of gold particles in the Nanoscale with light differs from its reaction with the light on the macro scale.

The change of the copper hardness according to the Nano volume

The hardness of copper increases by decreasing the volume of its particles to be in Nano volume.

Why is the behavior of matter unique (unusual) on the Nanoscale?

The very large ratio between the surface area and the volume of the Nano particles will give it new and unique physical and chemical properties like color, transparency, electric conductivity, melting point, heat conductivity, elasticity, toughness and the speed of chemical reaction.

The ratio between the surface area and the volume will increase to a very large value, so, more number of atoms will be exposed to the reaction at the same time, so, the reaction will be faster.

This idea can be understood also if you add two equal masses of sugar, one of them is fine powered and the other one is a block cube in equal volumes of water at the same temperature.

It is clear that fine powdered sugar dissolves in the water faster than a block cube because sugar powder has a greater ratio between the surface area and the volume than that of a sugar cube, so, more number of molecules will be exposed to the dissolving process at the same time.