Nanotechnology is used in producing Nano robots that enter the body through the blood stream to remove the blood clots from the vein walls without surgical interference, It is used in the early diagnosing of diseases and picturing of the organs and tissues.

Nano robots are specialized nano machines, They have dimensions in the order of nano-meters, Typically 0.5 to 3 microns large with 1-100 nm, Their parts are made of chemically inert forms of carbon, They are used in dentistry, They are used in major tooth repair, They induce local anaesthesia and they avoid discomfort to the patient .

Nanotechnology is used in exactly delivering of a medicine to the infected tissues and cells which increases the chances of healing and decreasing the harmful side effects of the traditional healing methods which does not distinguish between the infected cells .

Nanotechnology is used in producing extremely small devices for dialysis that are implanted in the body of the patient who suffers from kidney failure, Dr. Mustafa El-Sayed was the first Egyptian Scientist obtained the American National Science pendant for using gold Nano molecules to treat cancer disease . 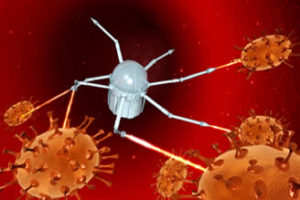 Nanotechnology is used in identifying bacteria that found in nutrients, So, we can use this technology in preserving the food, It is used in improving the nutrients, pesticides, and medicine for the plants and animals with special features.

Nanotechnology is used in producing Nano filters which are used to purify the air and water, Nano filters are used to solve the nuclear wastes problem and they are used to eliminate the dangerous elements from the industrial wastes.

The possible harmful effects of Nanotechnology

During the production of Nano substances , there are many wastes may be suspended in the air, then enter the water and the soil and they may easily penetrate the animal and the plant cells, this called Nano pollution, Nano pollution is the pollution caused by the wastes that are produced from preparing Nano substances.

The very minute Nano particles may enter the body of the human or the animal through the cell membrane of the skin and the lungs causing the diseases .

The social and economic problems between the rich word countries and the developing countries may increase due to the unequal distribution of technology and the economic resources .

Nanotechnology & Why is the behavior of matter unique ( unusual ) on the Nanoscale?