Nonmetal oxides are known as acidic oxides because they dissolve in water forming acidic solutions, we can use water to differentiate between calcium and zinc because calcium can react with cold water, while zinc reacts with hot water vapour at high temperature only. 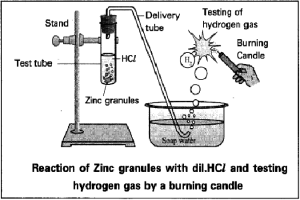 The reaction of metals with dilute acids

Reaction of metals with dilute acids

When you put a piece of magnesium strip in a test tube and add some dilute hydrochloric acid (HCl), gas bubbles are evolved. Active metals such as magnesium (Mg) and zinc (Zn) react with dilute acids (as hydrochloric acid) forming a salt of an acid and hydrogen gas which burns with a pop sound on approaching a burning match to it.

Reaction of metals with oxygen

Ignite one end of a magnesium strip until it burns then put it inside a jar filled with oxygen gas, Magnesium strip burns with a bright light and changes into a powder (magnesium oxide).

Add some water to the produced substance (magnesium oxide) with shaking, then add drops of violet litmus solution. Magnesium oxide dissolves in water. The solution turns into blue.

Metals such as magnesium (Mg) react with oxygen forming metal oxides, which are known as Basic oxides. Basic oxides are metallic oxides, some of them dissolve in water forming alkaline solutions.

Some basic oxides (such as magnesium oxide) dissolve in water forming alkaline solutions that turn litmus solution into blue.

The rise in sodium ion concentration (Na+) in the body causes a rise in blood pressure. so high blood pressure patients are advised to reduce table salt in their food.

Reaction of nonmetals with dilute acids

Put a piece of coal (carbon) in a test tube then add some dilute HCl to it. No reaction takes place. so, Nonmetals (such as carbon) don’t react with dilute acids (such as HCl).

Reaction of nonmetals with oxygen

Burn a piece of coal in a burning spoon and put it after complete burning in a jar filled with oxygen. Add some water to the jar with shaking and drops of violet litmus solution. so, The glow increases. The produced substances from burning (carbon dioxide) dissolves in water and the solution turns into red.

Nonmetals such as carbon (C) react with oxygen forming nonmetal oxides, most of them are known as Acidic oxides. Acidic oxides are nonmetallic oxides, which dissolve in water forming acidic solutions.

Some oxides as aluminum oxide (Al2O3) are known as “Amphoteric oxides” because they can react with acids as basic oxides and also react with bases as acidic oxides giving in the two cases salt and water.

We can use dilute HCl to differentiate between carbon and magnesium because magnesium is a metal that reacts with dilute HCl and hydrogen gas evolves, while carbon is a nonmetal that doesn’t react with HCl.

Comparison between metals and nonmetals

Metals are elements, which have less than four electrons in their outermost energy levels, They tend to lose electrons and change into positive ions, They are characterized by the largest atomic sizes, some of them react with dilute acids forming a salt of an acid and hydrogen gas. They react with oxygen forming basic oxides.

Nonmetals are elements, which have more than four electrons in their outermost energy levels, They tend to gain electrons and change into negative ions, They are characterized by the smallest atomic sizes, They don’t react with dilute acids. They react with oxygen forming acidic oxides.

Basic oxides are metal oxides, they are formed by the reaction of metal with oxygen, some of them dissolve in water forming alkaline solutions, their solutions turn litmus solution into blue, such as Na2O & MgO.

Acidic oxides are nonmetal oxides, they are formed by the reaction of nonmetal with oxygen, They dissolve in water forming acidic solutions, their solutions turn litmus solution into red, such as CO2 & SO2.