Chemical analysis is considered one of the important branches of chemical science which plays an important role in science progress, Also plays an important role in the progress of scientific fields such as medicine, agricultural, food & environmental industries, Chemical analysis is considered the branch of chemistry that deals with the identification of the elements forming a mixture or a compound, besides knowing the percentages of each of those elements.

Chemical analysis is used in the medical field to diagnose the diseases to estimate the percentages of blood sugar, albumin, urea & cholesterol which makes it easier for the doctor in diagnoses and treatment, also estimating the amount of the effective substances in medicines.

Chemical analysis is used in the agricultural field to improve the soil properties & crops, It is used to know its properties concerning to acidity, basicity, type and concentration of elements present in it, therefore it can be treated by adding the suitable fertilizers.

Chemical analysis is used in the environmental field to identify and measure the harmful environmental pollutants content in water and foods, also percentages of carbon monoxide, sulphur dioxide and nitrogen oxides gases in the air.

If you have an analyzed substance which is needed to identify its constituent elements percentage and kind of bonding together to represent the molecular formula of matter or the group of the compound if it is a mixture. 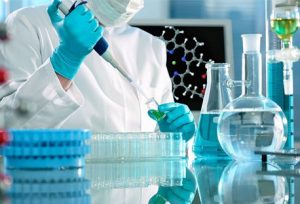 Accordingly, the practical qualitative chemical analysis should be done first to identify the components of the compound in order to be able to choose the appropriate quantitive method to analyze them.

The qualitative analysis aims to know the component of substance whether it is pure substance or mixture of several substances:

The principle of detection the acidic radicals: In the salt solution, the most stable acid, which is less volatile and has high boiling point, replaces the less stable acid, which is more volatile and has a low boiling point, in its salts, The less stable acid evolves in the form of gas of anhydride, so it can be identified, Anions can be classified into three groups, each group has a certain reagent and these groups are:

Hydrochloric acid is more stable than the acids from which these anions are derived when the acid reacts with salts of this anion, more stable acid replaces less stable acid which easy to volatile or decompose to gases which we can detect them using suitable reagent where gently heating is preferred to eject gases.

All metal carbonates are water-insoluble except sodium, potassium and ammonium carbonate and all carbonate are soluble in acids.

Sulphur dioxide gas evolved which has a very irritating smell and turns a paper wet with potassium dichromate acidified by sulphuric acid to green.

Hydrogen sulphide gas evolved which has a bad smell turns a paper wet with lead acetate to black.

Sulphur dioxide gas evolved and yellow ppt. as a result of suspend sulphur in solution.

Colourless nitric oxide gas evolved which turned reddish brown at the mouth of the tube.

The scientific base of the identification of the anions in the group of diluted HCl is that diluted HCl is more stable and less volatile than all the acids from which these anions are derived, therefore, diluted HCl can replace any of them in their salts.