Atmospheric air is a mixture of different gases such as oxygen , nitrogen , carbon dioxide and water vapour , Solution is a special type of mixtures , where its components are mixed and interfere till you can not distinguish between its particles .

Matter can be classified into pure substances & mixtures , Pure substance is the substance that is made of only one type of identical particles such as distilled ( pure ) water , sugar and baking soda .

Mixture is the substance that consists of more than one type of particles such as concrete , tomato sauce and mineral water ( mixture of water and some useful minerals as calcium and magnesium ) . 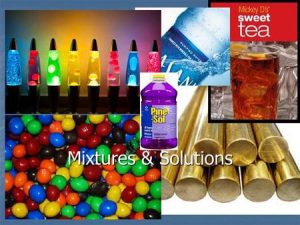 You can separate the tomato from the salad easily and eat it separately , The strawberry in the fruit salad keeps its taste and colour before and after mixing , You can add or remove the desired amount of vegetables in your vegetable soup , So , the properties of the mixture are :

A mixture of sand and iron fillings can be separated easily because the components of the mixture do not react together .

The components of the mixture do not react together , so , they can be separated easily by simple methods such as :

Formation of the solution & factors affecting the solubility process

Types of mixtures and solutions