Properties of Acids and Bases & Theories defining acids and bases

The acids and bases represent a large part of human life, Acids are used in many chemical industries like Fertilizers, Medicines, Plastic & Car batteries, Bases also have many uses in chemical industries like Soap, Detergents, Dyes & Medicines , For example , The vinegar that is used in some food and cleaning processes is an acidic solution that was early discovered .

Acids have a sour taste, They change the colour of litmus dye or litmus paper into red, Acids react with bases producing salt and water .

Acids react with active metals producing a salt of the acid and hydrogen gas H2 evolves.

Bases have a bitter taste and slippy feel, Bases change the colour of litmus dye or litmus paper into blue, Bases react with acids producing salt and water . 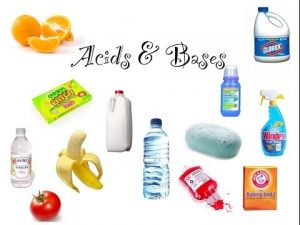 The more overall definitions of acid and base come from the studies and experiments that were placed in the form of theories, Acid-base theories are Arrhenius’s theory , Bronsted- Lowry’s theory and Lewis’s theory.

Arrhenius revealed ( proved ) his theory to define acids and bases , Arrhenius acid is the substance that dissolves in the water and ionized or dissociated giving one or more hydrogen ions ( H+ ) .

Arrhenius base is the substance that dissolves in the water and ionized or dissociated giving one or more hydroxide ions ( OH− ) .

Neutralization reaction is the reaction between an acid and a base to produce salt and water .

The ionic equation of this reaction according to Arrhenius’s theory is :

Na+ (aq) and Cl−(aq) ions are present in both sides of the equation without changing, So, they can be neglected ( cancelled ) from both sides of the chemical equation , So, the neutralization reaction can be represented by the following equation :

Carbon dioxide CO2 doesn’t contain a source of ( H+ ) ions, but it dissolves in water giving an aqueous acidic solution .

Ammonia NH3 doesn’t contain a source of ( OH− ) ions, but it dissolves in water giving an aqueous basic solution .

These observations do not agree with Arrhenius’s theory .

Bronsted-Lowry theory describes the behaviour of ammonia as a base .