The graphics tablet is the flat, portable pad which allows the users to draw, write and perform the software functions with the pen tool, It is used by the graphics designers and the illustrators, You can produce much more accurate drawings on the screen than you can with the mouse or the other pointing device.

The graphics tablet consists of two parts, the flat surface for drawing and the pen, the stylus or the puck that is programmed to work with the tablet, You get the pen holder and some tablets come with the cordless mouse which works on the tablet surface.

The graphics tablet consists of the flat pad (the tablet) on which you draw with the special pen, when you draw on the pad, The image will be created on the computer monitor from within the application which the tablet is connected to.

The graphics pen is controlled rather than touch control, you can place the paper over the pad and start tracing it out, Some pens have the pressure sensitive tip to allow the artist to draw heavier or lighter lines. 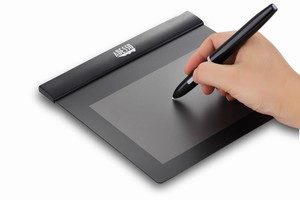 The graphics tablet is the digitizing tablet, graphics pad or drawing tablet, It is the alternate type of input device or in conjunction with the mouse, the trackball or the other pointing device, It allows the natural drawing motions, It produces smoother curves and it makes small, complex shapes more easily than the mouse.

Non-artists can use the graphics tablet because it offers a more ergonomic method of input that can reduce the repetitive strain injury, When combined with the art application such as Painter or Photoshop, The talented artist can produce incredible illustrations and images with it.

The graphics tablet is much more natural to draw the diagrams with the pencil type implement ( the stylus ) rather than with the mouse, The great level of accuracy can be achieved, applying more pressure with the pen leaves the darker line, while less pressure makes the lighter one.

The graphics tablet consists of the flat pad and specialized electronic pen, It is designed to make the digital artwork easier and more precise, drawing with the mouse is rarely ideal and often cumbersome and the tablet enables the handwritten documents.

The graphics tablets are used by the professional digital artists to more accurately place lines and they use the movements associated with drawing, They can more faithfully recreate their personal art styles than they can with the mouse or the touchscreen system.

The sensitive pen can be used to trace the existing printed images as it detects the pressure through the paper, It can be useful in copying your older work into the digital medium for storage or retouching.

The graphics tablet is lightweight and comparable in size to the laptop, You can draw, paint or edit your project on the tablet by using the pen tool, The results appear on the PC monitor, The direct handling and response of the pen and the tablet can create a faster workflow than the traditional mouse.

The graphics tablet surface recognizes various degrees of pressure and it applies varying marks to the image in response, The tablet keys can be programmed to scroll, zoom or perform many of the user’s favorite keystrokes.

The pen has various interchangeable nibs, It creates brush strokes, duplicating different types and sizes of brushes, The tap of the pen works as the clicking function of the mouse to the tablet’s surface, There is a built-in eraser on the opposite end of the pen, like the traditional pencil eraser, allowing quick edits.

The graphics tablets quickly attach to the computer via the USB cable, The images that created on the tablets are saved as the digital files which can be edited, emailed or printed like any other file, The graphics  tablets work with all of the popular photo and painting software programs available and they can be used with Mac or Windows platforms.

You can work on the LCD screen on the tablet’s face, the project will be shown on the tablet surface as well as the PC monitor, So, The creative process will be more direct because you can create the project on the tablet without having to monitor your progress on the computer screen.

The graphics tablets are much more expensive, Their cost may be prohibitive, They can be expensive but the prices are coming down, They are large investments for the artists or small studios, The high cost can be enough to prevent the investments, even if the system itself could actually be useful.

The large-scale deployment can require the significant investment, The cost is compounded when the repairs and the replacements are factored in, as the tablets are damaged or worn out over the course of their lives.

The graphics tablets are not really suitable for general selection work such as pointing and clicking on menu items, Despite their precision in rendering the artwork, The tablet’s pen or the mouse can cause the cursor confusion if they are left on the tablet while attempting to use another device.

Most interfaces on the desktop and the laptop computers are designed with the mouse and the keyboard in mind, making their operation somewhat clumsy with what is essentially the sophisticated stylus pen, If your pen has the button, So, When you use the button on the pen to click, The button can become awkward, especially with the extended use.

Animation technology in education and training advantages and disadvantages