Cancers in the eye (intraocular cancers)

In the children, The retinoblastoma (cancer which starts in cells in the retina) is the most popular primary intraocular cancer, and the medulloepithelioma is the next most common (but it is still extremely rare). 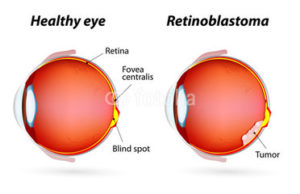 Intraocular melanoma (melanoma of the eye)

The melanomas develop from the pigment-making cells called the melanocytes, When the melanoma develops in the eye, It is usually in the uvea that is why these cancers are also called the uveal melanomas.

About 9 out of 10 Intraocular melanomas develop in the choroid or the ciliary body (which are parts of the uvea), The choroid cells make the same kind of pigment as the melanocytes in the skin.

The other intraocular melanomas start in the iris (It is part of the uvea), These are the easiest for the persons (or their doctor) to see because they start in the dark spot on the iris which has been found for many years and then begins to grow.

These melanomas are fairly slow growing, and they rarely spread to the other parts of the body, So, the people with iris melanomas generally have a good prognosis.

The eye cancer is rare, There are a number of different cancers which can affect the eye, The eye (ocular) melanoma is the most common, The eye melanoma doesn’t cause any symptoms and they may be found by the optician during the routine eye test.

The signs and symptoms can include blurred vision, seeing the flashing lights and the shadows, the brown or dark patches on the white area of the eye, These symptoms can be caused by the other eye conditions but it is a good idea to get them checked.

The orbital and adnexal cancers develop from the tissues such as the muscle, the nerve, and the skin around the eyeball and they are like their counterparts in other parts of the body, The cancers of the eyelid are usually the skin cancers (Melanoma Skin Cancer and Skin Cancer: Basal and Squamous Cell).

The main treatments for the eye melanoma are the brachytherapy,  tiny plates lined with the radioactive material called the plaques are inserted near the tumor and they are left in place for up to a week to kill the cancerous cells.

The external radiotherapy, a machine is used to carefully aim the beams of radiation at the tumor to kill the cancerous cells, The surgery is used to remove the tumor or part of the eye, It may be possible if the tumor is small and you still have some vision in your eye.

The removal of the eye (enucleation), It may be necessary if the tumor is large or you have lost your vision , the eye will be replaced with the artificial eye that matches your other eye, The chemotherapy is rarely used for the eye melanoma , but it may be suitable for the other types of eye cancer.