The citric acid cycle is a part of cellular respiration, the process where your body harvests energy from the food you eat, CAC is chemical reactions used by all aerobic organisms to release stored energy through the oxidation of acetyl-CoA derived from carbohydrates, fats & proteins, into adenosine triphosphate (ATP) and carbon dioxide, The citric acid cycle offers precursors of certain amino acids, as well as the reducing agent NADH, that is used in numerous other reactions.

It is a series of reactions in mitochondria that brings about the catabolism of acetyl residues, liberating hydrogen equivalents which upon oxidation, leads to the release of energy. It is known as the TCA cycle (tricarboxylic acid cycle) or the Krebs cycle.

The succinyl CoA has an energy-rich bond. The cleavage of the thioester bond of succinyl CoA is coupled to the phosphorylation of guanosine diphosphate (GDP) leading to the formation of succinate and GTP. This reversible reaction is catalyzed by the thiokinase enzyme (succinyl CoA synthetase). It is the only step in CAC that yields a high energy phosphate bond directly. The γ-phosphate group of GTP is readily transferred to adenosine diphosphate (ADP) to form ATP in a reaction catalyzed by nucleoside diphosphokinase (GTP + ADP⇔ GDP + ATP). 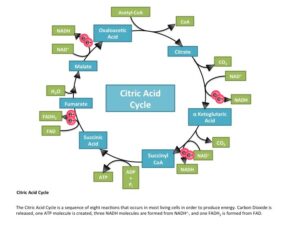 Every one mole of acetyl-CoA produces 12 moles of ATP as follows:

Total ATP produced from the complete oxidation of one molecule of glucose during glycolysis, oxidative decarboxylation, and CAC:

It is an alternative route for the oxidation of glucose without direct consumption or generation of ATP. It is active in the cytosol of many cells e.g. liver, adipose tissue, RBCs, adrenal cortex, ovaries, testis, retina, and lactating mammary gland. The pentose phosphate pathway occurs in two phases, oxidative and non-oxidative.

The major role of HMP in red cells is the production of NADPH, which protects these cells from oxidative damage by providing reduced glutathione for removal of H2O2.

Regulation of the pentose phosphate pathway

The reaction catalyzed by G6P dehydrogenase is the rate-limiting in the oxidative branch i.e. the control site. The most important regulatory factor is the level of NADP+. NADPH accumulation produces feedback inhibition of glucose-6-phosphate dehydrogenase.

The flow of G-6-P in PPP depends on the need for NADPH+H+, R-5-P, and ATP. Synthesis of G6PD is induced during feeding and repressed during fasting. Insulin, which is secreted in response to hyperglycemia, increases the rate of glucose oxidation by HMP. Insulin induces the synthesis of G6PD and 6-phosphogluconate dehydrogenase.