Antibiotics are medicines that fight bacteria, either by killing the invading bacteria or they weaken them, so, the immune system can fight and kill them more rapidly, Most antibiotics are bacteria fighters and most of them are cost-effective & affordable.

Antibiotics are an extremely powerful class of drugs that reduced mortality from many of the epidemic infectious diseases which are responsible for millions of deaths every year, They are known as the antibacterials, They can destroy or slow down the bacterial growth on the body and they can treat or combat the bacterial infection in the body. 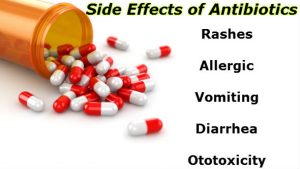 Antibiotics do not harm other normal body cells, It is possible to treat diseases by antibiotics which were fatal prior to the development of antibiotics, The prescribed antibodies can harm the disease-causing microorganisms but the antibiotics have been developed to attack the human cells for the treatment of cancer.

The antibiotics have a low incidence of gastrointestinal side effects, They can be used broadly by all age groups, They are safe in the pregnancy period too, They have enhanced acid stabilities, They do not create problems in the tissue and the intracellular penetration and small quantities of antibiotics are used as the food preservatives.

Antibiotics are one class of antimicrobials, a larger group that includes anti-viral, anti-fungal, and anti-parasitic drugs, They are reasonably harmless to humans, They can be used to cure infections caused by bacteria and they are used to treat infectious diseases in animals.

Antibiotics cure diseases by their property of being selectively toxic to the microorganisms, They are used to treat a variety of bacterial diseases, A small number of antibiotics have been developed to attack human cells for the treatment of cancer, They can cure cancer by only damaging the cells that are in the process of dividing.

Antibiotics can kill the healthy bacteria in the body, Sometimes antibiotics can lead to the complications such as yeast infections, Some antibiotics may be allergic depending on your drug allergies such as sulfa that is commonly present in many antibiotics.

Many antibiotics will have the side effects such as digestion issues, nausea, discomfort, diarrhea, and sensitivity to light, Some antibiotics induce hyper-sensitivity and they can cause an allergic response, Most anti-microbial drugs, antibiotics included cause toxic side effects, Their long-term health hazards are not known.

Antibiotics cause some side effects, The side effects are varied and range from fever and nausea to major allergic reactions, The common side effect is diarrhea as antibiotic disrupts the normal balance of the intestinal flora.

New strains (mutants) formed by the mutations are resistant to the antibiotics, the new mutants are more adaptable and replace the non-mutated ones as they withstand the antibiotics attack.

Antibiotics kill the normal microbial communities in our body, Our body may lose some of the beneficial mutualistic bacteria, Which will upset the normal balance of the existing microflora and the microfauna.