Platelets share in all steps of hemostasis. Vitamin K is a necessary cofactor for the enzyme that catalyzes one reaction in the synthesis of “vitamin K-dependent” coagulation factors in the liver. Once a blood clot is formed, it can follow two separate courses: either it is invaded by fibroblasts that subsequently from connective tissue, or it can undergo lysis (i.e. dissolve).

Plasma proteins contain an euglobulin called plasminogen (profibrinolysin) which when activated, is converted to plasmin (fibrinolysin). Plasmin is a proteolytic enzyme that digests fibrin threads and other substances in the clot such as prothrombin. Thus plasma can cause complete lysis (dissolution) of the blood clot.

When a clot is formed, a plasminogen is trapped in the clot along with other plasma proteins. This will not cause lysis of the clot until activated. The injured tissues and endothelium slowly release a powerful activator called tissue plasminogen activator (t-PA) that a few days later, after the clot has stopped the bleeding, converts plasminogen to plasmin, which removes the remaining unnecessary blood clot.

Many small blood vessels in which blood flow has been blocked by clots are reopened by this mechanism. Plasminogen activators are used in the treatment of cardiac and cerebral thrombosis to re-establish blood flow to vital organs. 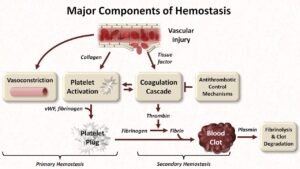 Normally,  endogenous anticoagulant mechanisms prevent clots from becoming unnecessary large by inhibition of activated clotting factors. This is accomplished by several systems that depend on an intact endothelial cell surface.

Tissue factor pathway inhibitor (TFPI): TFPI is a plasma protein that binds to the complex [tissue factor + Factor VIIa + Ca+2] in the extrinsic pathway and blocks the activity of Factor VIIa. TFPI is linked to the endothelial membrane, where it maintains a natural anti-thrombotic surface.

Role of vitamin K in coagulation

Vitamin K is a necessary cofactor for the enzyme that catalyzes one reaction in the synthesis of “vitamin K-dependent” coagulation factors in the liver. They are factor II (prothrombin), VII, IX, and X. Vitamin K deficiency impairs the formation of these factors, resulting in bleeding tendency.

Role of platelets in hemostasis

They share in all steps of hemostasis (vascular spasm, platelet plug formation, coagulation, and clot retraction).