DNA is made up of four nitrogenous bases which may be a derivative of Pyrimidines & Purines, pyrimidines are single ring as thymine (T) & cytosine (C), Purines are double rings as adenine (A) & guanine (G), In the early of 1950’s there was a strong evidence that DNA carries the cell’s genetic information and many researches were trying to find out the structure of the DNA molecule to make a model of it.

DNA strand is made up of nucleotides, each nucleotide consists of three parts which are:

The nucleotides are linked together in a strand of DNA, as follows:

The number of pyrimidine and purine nitrogenous bases in the DNA molecule is equal because :

Franklin used the X-rays diffraction technology to get pictures of highly purified DNA crystals, as :

In 1952, Franklin published such photographs of the crystals of a highly purified DNA, where she has shown that :

After Franklin published her pictures of DNA, the two British scientists Watson and Crick were the first to put an acceptable model of DNA. 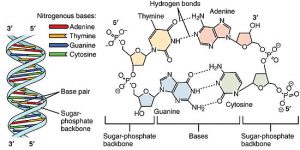 Model of DNA structure by Watson and Crick

Watson and Crick model of DNA structure is made up of two strands that are arranged like a ladder, as the ladder’s sides are the sugar-phosphate backbones of the two strands and the ladder’s rungs are the nitrogenous bases.

The rung may consist of either :

All the rungs of the ladder have the same width along the DNA molecule, and two DNA strands are always on the same distance from each other because each rung consists of a pair of a single ring ( pyrimidine) and another double rings (purine).

The whole ladder of DNA is twisted, with ten nucleotide pairs per turn to form the spiral or helix of DNA ( i.e. ten nucleotides per turn on one strand), because the spiral is composed of two strands wounded around each other, so, the DNA molecule is called a “double helix”.

Before the division, the DNA molecules are replicated (or duplicated), as each new cell receives a complete copy of the original cell’s genetic information.

Watson and Crick pointed out that the double-stranded and base-paired structure of the DNA molecule incorporates means, where the genetic information can be replicated accurately, Because the two strands have complementary base pairs, so, the nucleotides sequence of each strand automatically supplies the information needed to produce its partner (i.e. each old strand of DNA acts as a template to produce a new complementary DNA strand).

The replication of DNA demands the integrated action of a number of enzymes and proteins in the cell, For replication to occur, the following must happen:

The double helix must be unwounded, The DNA-helicase enzymes move along the double helix, separating the two strands from each other by breaking the hydrogen bonds between the paired nitrogenous bases, The strands separate from each other, so, they can form new hydrogen bonds with the new nucleotides partners, DNA-polymerase enzymes build the new DNA strands, where :

In the strand (3¯ → 5¯) that is the original template: The DNA-polymerase enzymes build the new DNA strand which catalyze the addition of monomers (nucleotides) one by one from the beginning (5¯ ) to the end (3¯ ) of the new strand, a monomer (nitrogenous base in the nucleotide) must be paired with the base exposed on the opposite template DNA strand.

DNA polymerase can work only in one direction from the (5¯ ) end towards the (3¯ ) end, So, It can build a new strand complementary to the template DNA strand (3¯→ 5¯ ), It can’t build a complementary strand to the opposite strand ( 5¯ → 3¯ ), except with the help of DNA-ligase enzyme.

Replication of DNA in prokaryotes: In prokaryotes, DNA exists in the cytoplasm as a double helix and its ends are joined to form a circle, The molecule is attached to the plasma membrane at one point where the replication occurs.

Replication of DNA in eukaryotes: DNA of eukaryotes is organized into several chromosomes, each chromosome contains a single DNA molecule which runs from one end of the chromosome to the other end and replication starts at any point along the molecule.

The causes of DNA damage ( causes of the biological polymers damage):

Any form of damage in DNA molecule could alter its information contents and produce disastrous changes in the cell’s proteins, Although thousands of changes occur in the DNA molecule every day, no more than two or three stable changes are accumulated in the cell every year.

Because the vast majority of these changes are eliminated with remarkable efficiency by a group of 20 different kinds of DNA repair enzymes which are DNA-ligases, while the changes that continue in the cell are due to the occurrence of damage in the two strands of DNA at the same location and the same time.

DNA-ligases recognize the damaged area of DNA, then repair it by replacing the damaged nucleotides with new complementary nucleotides to those on the strand opposite to the damaged portion, then the DNA structure remains constant when transferring to the new generations, From this we found that DNA-ligases play an important role in the genetic stability of the living organisms that contain them.

DNA repairing depends on the existence of two copies of the genetic information, one in each strand of the double helix, as it must be one of these strands remains undamaged, so, the repair enzymes can use it as a template to replace the damaged segment on the other strand, Therefore, most the damages are remedied, unless both strands are altered (exposed to a damage) at the same location and the same time.

The genetic material of some viruses presents in the form of a single-stranded RNA which can’t be repaired, These viruses show high rates of the genetic changes, resulting from the damage of their RNA, So, the mutations increase.

From the previous, we conclude that: The double helix is vital to the genetic stability of the living organisms that contain it, There are conditions in which can’t be repaired the damage of the genetic material, which are: