Platelets help your body form clots to stop bleeding, they are tiny blood cells, when one of the blood vessels gets damaged, it sends out signals to the platelets, This process is called adhesion, platelets grow sticky tentacles that help them adhere to one another, They send out chemical signals to attract more platelets, The additional platelets pile onto the clot in a process called the aggregation.

Platelets can form a clot to fix the damage, they do not have any cell nucleus. they are so-called they appear in blood films as small flat plates. In lower vertebrates, they are called thrombocytes. However, this name is not true for mammalian platelets which are non-nucleated discs. Platelets can’t reproduce. they are a component of blood whose function to react to bleeding from blood vessel injury by clumping, thereby initiating a blood clot, and  Normal platelet count is 150,000-400,000/mm³.

The shape of each platelet is non-nucleated biconvex discs. The diameter of each platelet is about 2-3μm in diameter. A blood platelet has a granular central region, the granulomere which contains reddish-purple (azurophilic) granules. At the periphery, there is a pale basophilic zone, the hyalomere.

Shape: when activated irregular outline due to the presence of pseudopodia which serves for motility. The platelet membrane is covered by a well-developed glycoprotein. The coat that plays an important role in platelet function. 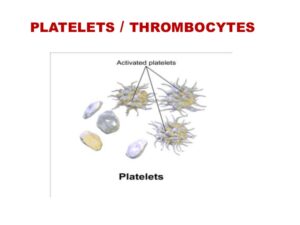 A network of actin and myosin filaments that causes contraction of the platelet for motility and for clot retraction. A circumferential bundle of microtubules which maintains the discoid shape of platelets. 2 systems of membranes that are involved in the regulation of the intra-platelet calcium concentration and thus the control of platelet degranulation.

These are the open canalicular system, formed of membrane-bounded small canaliculi that open on the platelet surface. The dense tubular system formed of remnants of the endoplasmic reticulum of the platelets mother cell (the megakaryocyte).

Few ribosomes, mitochondria and glycogen particles. Three types of membrane-bounded granules which are released by exocytosis during the process of thrombus formation. These are:

Alpha granules: these are abundant, large granules that contain fibrinogen and other coagulation factors.

When a 3-year-old boy is brought to the pediatrician by his parents, who have noted excessive bleeding around the knees and elbows. Their parents noted that the toddler bleeds very easily when the skin is scratched. Family history is significant for the presence of hemophilia in the mother’s family. His tests revealed the following:

Outcome: A diagnosis of hemophilia A was made. The boy’s condition improved with regular intravenous infusion of recombinant factor VIII.