The people receive blood transfusions for many reasons such as surgery, injury, disease & bleeding disorders, Blood transfusion is a medical procedure in which donated blood is provided to you through a narrow tube placed within a vein in your arm, This life-saving procedure helps replace blood lost due to surgery or injury. Blood transfusion can help if an illness prevents your body from making blood or some of your blood’s components correctly.

Blood transfusion is used for many medical conditions, It is the process of transferring blood or blood products into one’s circulation intravenously, It is used to replace lost components of the blood,  modern medical transfusions uses only components of the blood, such as red blood cells, white blood cells, plasma, clotting factors, and platelets.

Red blood cells (RBC) contain hemoglobin and supply the cells of the body with oxygen, White blood cells are not used during transfusion, but are part of the immune system, and fight infections, Plasma is the liquid part of the blood, It acts as a buffer, and contains proteins and important substances needed for the body’s overall health, Platelets are used in blood clotting, and they prevent the body from bleeding.

Blood transfusions occur without complications. When complications do occur, they’re typically mild. In 1818, British obstetrician James Blundell successfully transfused human blood for the first time, to a patient who had bled during childbirth. Subsequently, several blood transfusions were done: some saved lives, while others ended in severe complications and death.

The reason behind the often fatal blood transfusions became clear when Karl Landsteiner, an Austrian physician, discovered the first 3 human blood groups, A, B, and C in 1900. Blood type C was later changed to O. He received the Nobel Prize for physiology or Medicine in 1930. His colleagues Alfred Decastello and Adriano Sturli added AB, the fourth type, in 1902. 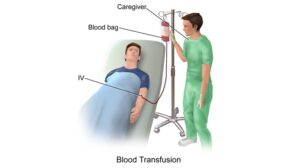 Why Would You Need a Blood Transfusion?

When you’ve had major surgery or a serious injury and you need to replace lost blood, If you’ve experienced bleeding in your digestive tract from an ulcer or other condition, If you have a blood disorder or severe liver problems, When you have an illness such as leukemia or kidney disease that causes anemia (not enough healthy red blood cells), when you’ve received cancer treatments like radiation or chemotherapy.

Several components of blood can be isolated and transfused alone, such as:

Steps have done before blood transfusion

In cross-matching, donor red cells are mixed with recipient plasma on a slide and checked for agglutination. It is advisable to check the action of the donor’s plasma on the recipient cells in addition, even though, as noted above, this is rarely a source of trouble. If agglutination occurs in any one of the two slides or both, then these types of blood are not compatible and blood transfusion should not be performed.

The aim of this procedure is to detect the presence of any possible unknown agglutinogens that would cause transfusion reactions due to incompatibilities in systems other than ABO and Rh. Thus blood should never be transfused without being across matched except in the most extreme emergencies.

When one type of blood is transfused to a recipient of an incompatible blood type, a haemolytic transfusion reaction is likely to occur as the red blood cells of the donor blood are agglutinated, haemolysed then phagocytosed by the tissue macrophage system where hemoglobin is released.

Fate of released hemoglobin: Hemoglobin released from the red cells is converted by phagocytes into bilirubin that is excreted into the bile by the liver. The concentration of bilirubin in the body fluid rises high enough to cause jaundice, i.e the person’s tissues become tinged with yellow bile pigments. Some of free hemoglobin can leak through the glomerular membranes into the kidney tubules leading to acute renal failure.

One of the most fatal effects of transfusion reactions is acute kidney failure that seems to result from three different causes:

All these factors can lead to acute renal failure and if the failure is complete, the patient may die within a weak or two unless properly treated.

In order to eliminate the risk of transfusion reactions and prevent the transmission of infectious blood-borne diseases, autologous transfusion is sometimes done. In this popular procedure, the withdrawal of the patient’s own blood in advance of elective surgery is done. Then, it is infused back to the same patient during the surgery if needed.