Immediately after a blood vessel is cut, the vessel wall contracts, this reduces blood flow from the ruptured vessel. The contraction results from:

This local vascular spasm can last for many minutes or even hours during which the process of platelet plugging and blood coagulation can take place. 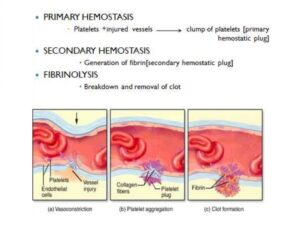 Formation of the platelet plug

When the receptors on the platelet membrane come in contact with damaged endothelium or collagen fibers in the vascular wall, the platelets immediately change their shape. They become sticky and develop finger-like processes so that they stick to the collagen fibers, a process called platelet adhesion. This is followed by platelet activation. Activated platelets release the contents of their dense granules, including ADP, thromboxane A2, and serotonin.

These 3 agents in turn act on nearby platelets to activate them, causing them to adhere to the originally activated platelets, resulting in platelet aggregation. Thus, a platelet plug is formed, which is usually successful in stopping blood loss if the vessel opening is small. If there is a large hole, a blood clot is required.

Formation of the blood clot (coagulation)

The clot begins to develop a few seconds after the vascular injury. Coagulation factors are essential to coagulation. They are mostly plasma proteins (inactive proteolytic enzymes) synthesized by the liver. However, some are not protein (e.g. calcium ions) and some are released by the platelets.

Steps 2 and 3 are called the common pathway.

In both cases, a chain reaction is triggered in which inactive coagulation factors in the circulation, are sequentially activated. The extrinsic and intrinsic pathways converge on a that ends by converting the soluble plasma protein, fibrinogen (coagulation factor I), to insoluble fibrin, the main constituent of the clot.

Thrombin first converts fibrinogen to fibrin monomers, then many fibrin monomers polymerize into fibrin threads that form the clot. This reaction requires Ca++. Thrombin also activates factor XIII (fibrin-stabilizing factor), which mediates the covalent crosslinking of the fibrin polymers to form a mesh called stable fibrin that is even less soluble than fibrin polymers.

The role of calcium ions in the intrinsic & extrinsic pathways

After 20-60 minutes of clot formation, the clot begins to contract and expresses most of the fluid from the clot. The fluid expressed is called serum, which is similar to plasma but without all its fibrinogen and most of the other clotting factors. Thus serum cannot clot because of the lack of these factors. Platelets are necessary for clot retraction to occur.

Role of platelets in clot retraction