The small intestine connects the stomach and the large intestine, It is about 20 feet long and folds many times to fit inside the abdomen, It has three parts: the duodenum, jejunum, and ileum, It helps to digest food coming from the stomach, It absorbs nutrients (vitamins, minerals, carbohydrates, fats, proteins) and water from food so they can be used by the body.

Histological structure of the small intestine

The main function of the small intestine by its three parts; duodenum, jejunum, and ileum is the completion of digestion as well as absorption. Therefore, the small intestine has several histological modifications to fulfill its function, including:

1. The small intestine is the longest segment of the digestive tube, thus allowing prolonged contact between food and digestive enzymes to complete the process of digestion and to permit absorption of the digested products.

2. Modification of the luminal surface, 3 types of modification of intestinal mucosa and submucosa to increase the total surface area available for absorption of nutrients by 400 to 600 folds, these are: 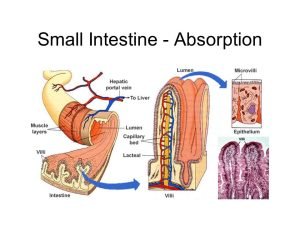 Structure of the small intestine

Histological organization of the small intestine

The three small intestinal segments have many common features except for certain histological structures characterizing each part, The wall of the small intestine is formed of the following layers:

I- Intestinal villi: as mentioned above, they are projections of the mucosa. The covering epithelium of the villus is continuous with that of the intestinal glands.

Each intestinal villus is formed of a central core of loose connective tissue, extending from the lamina propria. It contains fenestrated capillary loops, a blindly-ended central lymphatic channel (central lacteal) and a few smooth muscle fibers. The villous epithelium, formed of 4 types of cells, these are:

These are simple tubular glands that extend deep through the full thickness of the laming propria to open between the bases of the villi. Each crypt is lined by 5 types of cells these are:

It is occupied by the intestinal crypts of Lieberkühn. In the ileum the lamina propria contains the Peyer’s patches, which are characterized by the following:

They are aggregations of lymphoid nodules and loose lymphoid tissue as a part of the mucosa-associated lymphoid tissue (MALT). They are located on the side of the intestine lying opposite to the mesenteric attachment (anti-mesenteric).

They extend through the muscularis mucosae and appear also in the submucosa. The epithelium over these patches is usually lacking the villi (ironed mucosal appearance) and contains the M cells.

Peyer’s patches serve as an immunological barrier against the antigens in the lumen with the secretion of IgA antibodies by the plasma cells, released across the mucosal epithelial cells into the intestinal lumen.

In the duodenum, the submucosa of its proximal part is occupied by Brunner’s glands, which are mucous glands with their ducts open into the bottom of the intestinal crypts. They secrete thick alkaline mucus to protect the duodenal mucosa by neutralizing the gastric chyme. in the ileum, extensions of the Peyer’s patches are usually present in the submucosa.

Serosa: the small intestine is covered by the visceral layer of the peritoneum (the mesothelium) continuous with that of the mesenteries.