The cerebellum consists of two large hemispheres which are united by a midline vermis. It presents an anterior notch occupied by the brainstem and a posterior notch occupied by flax cerebelli, It is the largest part of the hindbrain, It is roughly spherical in shape, but its greatest diameter is transverse. In adults, the weight ratio of the cerebellum to the cerebrum is 1:10; in infants, this ratio is 1:20.

It occupies the posterior cranial fossa, where it is covered by the tentorium cerebelli. It lies dorsal to the pons and medulla; being separated from them by the cavity of the 4th ventricle. Three pairs of cerebellar peduncles connect the cerebellum with the three segments of the brainstem.

The cerebellum presents two surfaces; superior and inferior. Each surface presents a vermis. On the superior surface, the superior vermis is continuous with the 2 cerebellar hemispheres. While on the inferior surface, the 2 cerebellar hemispheres are separated by a groove called vallecula cerebelli, which is occupied by the inferior vermis.

Fissures of the cerebellum

The postpyramidal and the retrotonsillar fissures constitute the secondary fissure or fissure secunda. 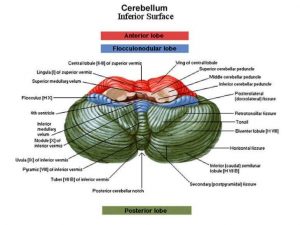 Lobes of the cerebellum

The cerebellum consists of 3 lobes; each one has a central part called vermis and 2 lateral extensions called cerebellar hemispheres. These lobes are:

Internal structure of the cerebellum

Cut section of the cerebellum consists of:

a. Outer cortex of grey matter, the cerebellar cortex.

b. Medullary core of white matter contains 4 pairs of intrinsic nuclei arranged from lateral to medial as follows:

Outer cerebellar cortex is organized into groups of folia, termed lobules that are separated from one another by fissures. Hence, the name folia rather than gyri is used to describe the convolution, In a section through the vermis, the lobules appear to radiate from the apex of the roof of the 4th ventricle, Anatomists recognize ten lobules whose nomenclature is used largely by specialists studying the cerebellum.

Two fissures are particularly deep and divide the various lobules into three lobes: The primary fissure separates the anterior lobe from the posterior lobe, The flocculo-nodular lobe is separated from the posterior lobe by the posterolateral fissure, Beneath the cerebellar cortex is the white matter, which contains axons coursing to and from the cortex, The branching pattern of the white matter of the cerebellum Inspired early anatomists to refer to it as the arbor vitae.

White matter of the cerebellum consists of:

I. Superior cerebellar peduncle: forms connection between the midbrain and cerebellum, through which pass:

a. Afferent fibers of:

b. Efferent fibers: most of them cross the midline and divide into:

III. Inferior cerebellar peduncle: forms connection between the medulla oblongata and cerebellum, through which pass:

a. Afferent fibers of:

b. Efferent fibers of:

Blood supply of the cerebellum

B. Venous drainage: Cerebellar veins have a course similar to that of the arteries. They drain into the surrounding venous dural sinuses.