Upper motor neuron lesion (UMNL) means lesions that affect the cortical motor areas or the pathways of the descending tracts in the brain or spinal cord.

Causes: vascular, trauma, tumor, or degenerative diseases. The most common lesions are lesions of the internal capsule commonly caused by vascular disorders. 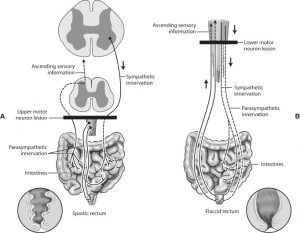 Lower motor neuron lesion (LMNL) means lesion or damage to the lower motor neurons in the spinal ventral horn (or motor nerve innervating a given muscle) or the corresponding motor nuclei of cranial nerves in the brainstem.

I. Complete transection of the spinal cord

Spinal cord injury can occur from many causes, including trauma, tumor, ischemia, and demyelinating diseases. If the lesion is above the level of C3, breathing could be affected. Transection in the lower cervical region results in quadriplegia i.e. paralysis of the four limbs. Transection in the thoracic region results in paraplegia i.e. paralysis of both lower limbs.

A. Stage of spinal shock

When the transection is complete there is usually a period after the accident when all spinal reflexes below the level of the transection are reduced or completely suppressed. This condition is known as spinal shock. This stage is characterized by:

Complications as urinary tract infection and bedsores may occur during spinal shock. Therefore, adequate management of the paraplegic patient is very important to prevent the occurrence of complications.

The duration of spinal shock is much shorter in animals than in human (in animals it lasts for minutes up to hours or day). The long recovery period for humans reflects the greater influence of descending input on spinal reflex circuits. The cause of spinal shock is due to sudden withdrawal of tonic facilitatory influence from the brain

B. Stage of recovery

During the course of weeks and months following spinal shock, the following occurs:

II. Hemisection of the spinal cord

If one side of the cord is transected, it leads to a characteristic pattern known as Brown Sequard syndrome; which is caused commonly by trauma, herniated disk, or spinal cord tumor, the following manifestations could be found:

Syringomyelia is a developmental abnormality that results in a cavity formation in the spinal cord originating in the central canal and is common at the cervical spinal cord.

The cavity interrupts the crossing spinothalamic fibers leading to bilateral loss of pain, and temperature sensations at the level of affected segments, while the dorsal column sensation of the same segments remains intact, so syringomyelia is an example of dissociated anesthesia.

In late stages, the overgrowing tissue extends towards the ventral spinal horn destroying the anterior horn cells producing muscle weakness and may be muscle atrophy at the level of the affected segment.