White matter consists of bundles, that connect various grey matter areas of the brain to each other and carry nerve impulses between neurons, It is white because of the fatty substance (myelin) that surrounds the nerve fibers (axons), It is areas of the central nervous system (CNS) that are mainly made up of myelinated axons, it is called tracts, It affects learning & brain functions.

White matter of the brain

The white matter of the brain is divided into:

I. Association fibers: connect between 2 areas on the same side of the cerebral hemisphere.

These may be subdivided into:

II. Projection fibers: these are fibers passing from or to the cerebral cortex. Thus they subdivided into:

IIl. Commissural fibers: these connect between 2 same areas on both sides of the cerebral hemispheres. 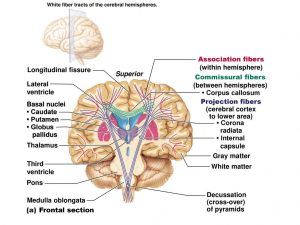 White matter of the brain

Anterior commissure is present in the upper part of the lamina terminalis, It connects between the following olfactory structure of both sides: Olfactory bulb, Anterior perforated substance, Pyriform area, and Amygdaloid bodies.

Posterior commissure is present in the stalk of the pineal body, just above the upper end of the cerebral aqueduct. It connects between visual structures on both sides

Habenular commissure is present in the stalk of the pineal body, just above the posterior commissure, Its fibers are derived from the stria habenularis.

Hippocampal commissure (commissure of the fornix) is in the form of transverse fibers crossing from one crus of the fornix to the other crus just behind the body of the fornix, These fibers connect the hippocampus with its fellow of the opposite side.

Corpus callosum: It is the greatest commissure, The corpus callosum consists of the rostrum, genu, body, and splenium:

The Internal capsule is composed of all the fibers, afferent and efferent, which go to, or come from, the cerebral cortex. It is divided into:

B. Genu: it contains the corticobulbar fibers.

1. Thalamo-lentiform part: it lies between the lentiform nucleus and the thalamus; it contains:

2. Retro-lentiform part extends caudally behind the lentiform nucleus; it contains:

3. Sub-lentiform part passing beneath the lentiform nucleus; it contains:

Blood supply of the internal capsule

The internal capsule, both anterior and posterior limbs, is supplied primarily by the lateral striate branches of the middle cerebral artery. In addition to these arteries, each part of the internal capsule receives another arterial branch, these are: