Diencephalon is located between the telencephalon and the midbrain, It is known as the ‘tweenbrain in older literature, It consists of structures that are on either side of the third ventricle, including the thalamus, the hypothalamus, the epithalamus, and the subthalamus, The thalamus has many functions including relaying sensory and motor signals to the cerebral cortex and regulating consciousness, sleep, and alertness. 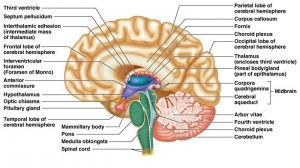 It is an oval mass of grey matter situated on each side of the 3rd ventricle and reaching some distance caudal to that cavity. It is about 4 cm long and 1.5 cm broad. The thalamus has:

Relations of the thalamus

The anterior end is narrow and it lies near the median plane forming the posterior boundary of the interventricular foramen.

Posterior end: it is expanded and called pulvinar. it is directed dorsally and laterally.

Superior surface: It is related to the following structures from lateral to medial:

Inferior surface: related to the subthalamus, hypothalamus, and tegmentum of the midbrain.

The lateral surface is related to the posterior limb of the internal capsule which separates it from the lentiform nucleus.

Internal structure of the thalamus

Internally, the thalamic grey matter is incompletely divided by a vertical sheet of white matter called the internal medullary lamina, which splits antero-superiorly in a Y-shaped manner, Accordingly, the main mass of the thalamus is divided into:

I. Specific group of nuclei:

B. Medial group: the nucleus medialis dorsalis (mediodorsal or dorsomedial).

They represent the different nerve fibers connecting the thalamus to the cerebral cortex. They include:

Blood supply of the thalamus

It is supplied mainly by branches from posterior communicating, posterior cerebral, posterior choroidal, and basilar arteries.

The metathalamus consists of the medial and lateral geniculate bodies which lie on the inferior surface of the pulvinar of the thalamus. From the physiological point of view both the thalamus and metathalamus are considered one structure.

It is a small avoid mass of grey matter situated lateral to the medial geniculate body, It is connected with the optic tract (in front), and the brachium of the superior colliculus (behind), It receives most of the fibers of the optic tract carrying visual impulses, It/sends efferent fibers in the form of optic radiation to the visual area.

Position & relations: The hypothalamus includes the structures in the anterior wall and floor of the 3rd ventricle; the hypothalamic nuclei are classified into:

The subthalamus is a part of the diencephalon situated just above the tegmentum of the midbrain, between it and the ventral nuclei of the thalamus.

The subthalamus contains mainly the subthalamic nucleus. It is a large nucleus that lies above the substantia nigra and medial to the internal capsule.