Physiology of the thalamus

From a physiological point of view, thalamic nuclei can be divided into nonspecific or specific nuclei. Nonspecific thalamic nuclei receive input from several sources they are generalized, functionally non-specific nuclei. They process input coming from the reticular activating system in the brainstem and project to wide areas of the cortex. They also receive input from the ascending pain pathways.

The specific thalamic nuclei receive input from specific sensory or motor systems with distinct sensory or motor functions. There are more precise projections between these nuclei and restricted cortical zones.

Functions of the thalamus

1. Sensory functions: the thalamus conveys almost all sensations to the cerebral cortex. These sensations include:

3. Arousal functions: the non-specific thalamic nuclei such as the intralaminar and midline nuclei are part of the ascending reticular activating system which controls wakefulness and arousal.

4. Emotional functions: the anterior nucleus is connected with the limbic system and concerned with control of emotional reactions. The lateral dorsal nucleus (LD) receives input from the hypothalamus and projects to the cingulate cortex and contributes to the autonomic component of emotions.

5. Higher functions: the dorsomedial nucleus of the thalamus plays a role in and memory through its connection with the cerebral cortex. 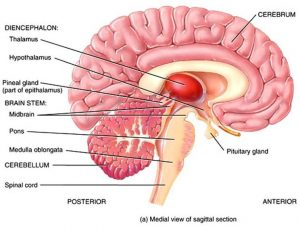 The main function of the hypothalamus is to maintain homeostasis. Homeostasis is the process by the internal physiological and chemical environment of the body is kept constant. The hypothalamus functions to keep factors such as blood pressure, body temperature, fluid, and electrolyte balance, and body weight remarkably fixed and held to a precise value called the set-point.

Specific receptors & sensors throughout the body detect changes in the normal balance of body functions and chemistry that are produced by stress stimuli that can range from injury or infection to pain and emotional distress, These data are transmitted to the hypothalamic nuclei and affect their discharge rate to restore homeostasis, Changes in discharge rate result in altered hypothalamic efferent outflow and hence change in the functions of regulatory systems that counteract the stress stimulus and restore homeostasis.

Functions of the hypothalamus

1. Regulation of the autonomic nervous system:

2. Control of endocrine functions: The hypothalamus controls functions of anterior and posterior pituitary glands through vascular and neural connections. The paraventricular and supraoptic nuclei secrete vasopressin and oxytocin.

The hypothalamus is a center for body temperature regulation. Anterior hypothalamic nuclei are concerned with heat loss while posterior hypothalamic nuclei are concerned with heat productions. Peripheral temperature receptors in the skin as well as central thermoreceptors within the hypothalamic preoptic area, send information to the heat regulating canters which initiates reflex responses as shivering and peripheral vasoconstriction on exposure to cold, while sweating and peripheral vasodilatation occur on exposure to heat to maintain body temperature constant.

There are different hypotheses related to the regulation of food intake by the hypothalamus:

The suprachiasmatic nucleus receives direct input from the retinal ganglion cells which synchronizes body functions with daily periods of light and dark. Most living organisms have fluctuations in bodily function that are about 24 hours in length. In humans, these functions include the rhythms of ACTH secretion and melatonin secretion; sleep-wake cycles the body temperature cycle.

The hypothalamus is part of the limbic system, it controls the fight or flight response in response to stimulation from the amygdala. The posterior hypothalamus increases sympathetic activity through connections with the sympathetic nervous system which increases heart rate, blood pressure, blood flow to the muscles, and respiration. It also causes increase awareness and aggressive behavior.

Physiology of the limbic system

The limbic system constitutes several cortical and subcortical structures that interact together to mediate emotions. The cortical structures are formed of a band of primitive cortical tissue that encircles the upper brainstem and includes the cingulate gyrus and the parahypocampal gyrus.

The subcortical structures include the thalamus, the hippocampus, the hypothalamus and the amygdala. The limbic system is also strongly linked to the oribitofrontal cortex.

Connections of the limbic system

Functions of the limbic system

1. The thalamus: is a relay station for most sensations coming from the body and most emotions are related to this sensory input.

The network involved in motivation and reward Includes the basal ganglia, the prefrontal cortex, and the nucleus accumbens. Dopamine triggers reward sensitivity, allowing us to stay motivated towards a reward. When we know there is a reason we are performing a task, and a reward for completing it, then we stay focused.

3. The hypothalamus: regulates the physical response to emotions by controlling the endocrine and autonomic nervous systems.

5. The amygdala is involved in: