Histological structure of T.S section of a peripheral nerve

A. Connective tissue sheath has supportive as well as nutritive function as it carries many blood vessels to the nerve trunk. It is formed of:

B. Nerve fibers: The majority of nerve trunks are mixed containing myelinated and unmyelinated nerve fibers. The nerve fibers are aggregated in well-circumscribed bundles (fascicles).

They are the supporting cells of the nervous system. Neuroglia cells are mainly branching cells that bind neurons together and to other elements e.g. blood vessels. They could be studied histologically by immunohistochemical staining using antibodies against Glial Fibrillary Acidic Protein, other methods use gold or silver impregnation technique. The neuroglial cells include:

I. Neuroglia in the CNS, these are:

Histological features: large, stellate-shaped cells. They have multiple radiating processes. each ends by foot-like expansion applied on the surface of nearby blood vessels.

II- Neuroglia outside the CNS include: 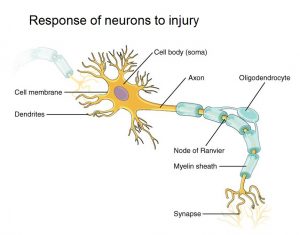 Response of neurons to injury

Response of neurons to injury

If an injury occurs e.g. traumatic cut or crushing in nerve fiber, a complex sequence of events is expected in the form of:

The degeneration takes place in the axon and myelin sheath but not in Schwann cells. Nerve fibers and myelin degenerate totally and phagocytosed by the macrophages from the surrounding connective tissue.

It is the degeneration of the perikaryon after its Nerve fiber injury.

Regenerative changes after injury of neurons:

Regenerative changes after injury of nerve fiber in PNS:

– In the distal stump:

– In the proximal stump: