These are 5 masses of grey matter in the subcortical part of the cerebral hemisphere on each side of the brain. They include Caudate nucleus, Lentiform nucleus. The caudate and lentiform together are called corpus striatum, Amygdaloid body, Claustrum, The basal ganglia also include substantia nigra (SN) and subthalamic nucleus.

the caudate nucleus is a curved nucleus formed of head, body, and tail. It is related to the lateral ventricle as follows:

It is so-called because it resembles a biconvex lens. It is divided by a band of the white lamina (lateral medullary lamina) into putamen laterally and globus pallidus (GP) medially. The globus is subdivided into medial and lateral segments by another curved lamina (medial or internal medullary lamina) of white matter. It is related medially to the internal capsule and laterally to the external capsule, claustrum, extreme capsule, and insula.

It is an irregular complex of nuclei that lies deep to the uncus it is related to the anterior part of the roof of the inferior horn of the lateral ventricle. It is connected with the olfactory structures and forms part of the limbic system. Its cell axons are named stria terminalis. 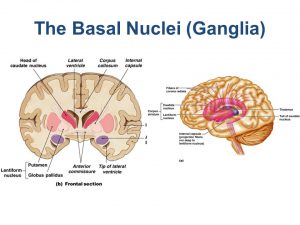 Physiology of the basal ganglia

Physiology of the basal ganglia

The basal ganglia are five subcortical nuclei on each side of the brain. The globus pallidus is divided into external (GPext) and internal segments (GPint), The caudate and putamen are regarded as the receiving center of the basal ganglia, while the globus pallidus internal segment is regarded as the discharging center, The substantia nigra is divided into 2 parts, the pars compact, and the pars reticulata.

Internal projections of the basal ganglia

There are many internal basal ganglia projections, they include:

Motor pathways of the basal ganglia

The GPint neurons inhibit the thalamus thereby producing a net inhibition on the motor cortex to suppress inappropriate motor programs, The normal functioning of the basal ganglia involves a proper balance between the activity of these two pathways; stimulation of dopamine (D2) receptors hyperpolarizes and inhibits the indirect pathway striatal neurons.

Functions of the basal ganglia

2. Initiation of conjugate eye movements: Eye movements are initiated in the frontal eye field area; however, initiation of eye movements requires the activation of the superior colliculus neurons (which are normally tonically inhibited by substantia nigra pars reticulata neurons), Momentarily inhibition of substantia nigra through the basal ganglia oculomotor pathway, allows activation of the collicular neurons, allowing the change of gaze to a new location.

4. Emotional function: mediating empathy towards others and motivational behavior.

The loss of the dopamine-containing neurons of the pars compacta of the substantia nigra:

1. Slowness of movement (bradykinesia): the disease is characterized by slowing of normal movement, and difficulty in initiating movements which are manifested as:

2. Resting tremors: coarse static tremors that are seen at rest. They usually begin in one extremity and spread to the others, affecting the distal joints of the limbs preferentially. In the hand, the tremors may involve the thumb and fingers rolling together, so it is called pill-rolling in character.