The reticular formation is an anatomic area in the brainstem made up of various neurons and fibers with discrete and multiple functions. It is associated with the regulation of various sensory-motor, arousal, and autonomic functions. It also contains neurons that secrete neuromodulators.

Functions of the reticular formation 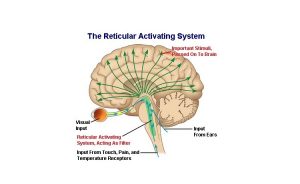 I- Brain areas involved in arousal

The brainstem and hypothalamus promote wakefulness by sending excitatory signals to the cerebral cortex to maintain arousal.

a. The reticular activating system:

The brainstem maintains arousal through the reticular activating system (RAS), which is a set of connected nuclei in the upper pons and midbrain. The RAS is composed of several pathways connecting the brainstem to the cortex. These pathways originate in the upper brainstem and project to the intralaminar thalamic nuclei and to the cerebral cortex.

Function of the RAS

The main function of the RAS is to discharge to the thalamus and cortex to stimulate thalamic and cortical activity and promote arousal. Injury to the reticular activating system can result in an irreversible coma. The activity of RAS is affected by several factors:

b. Other arousal areas and neurotransmitters in the brainstem:

There are certain areas in the brain that promote sleep, these areas include:

There are four types :

During sleep, a subject passes periodically through several stages in an orderly fashion. These stages are defined by the appearance of certain wave patterns in the EEG.

A. Slow-wave sleep (non-REM sleep): this type of sleep is characterized by:

Slow-wave sleep (non-REM sleep) is divided into 4 stages depending upon EEG pattern. During wakefulness with closed eyes and a relaxed mind, the alpha waves of EEG appear, The passage from wakefulness to non-REM sleep is characterized by progressively slower frequencies and higher voltage activities in the EEG.

B. Rapid eye movement sleep (REM sleep): this type occurs in episodes of 5-30 minutes which recur about every 90 minutes. It is characterized by:

The sleep cycle consists of one episode of non-REM followed by REM sleep, This cycle is repeated 4-6 times every night, A young adult first enters non-REM sleep, passes through stage 1 and 2, and spend 70-100 minutes in stage 3 and 4, then sleep lighten again, ascend to stage 2 and suddenly enters a brief period of REM sleep, This cycle is repeated at intervals of about 90 minutes throughout the night. However, there is less stage 3 and 4 sleep and more REM sleep toward morning.