The prostate is a firm partly glandular and partly fibro-muscular organ. It is in the pelvic cavity, between the lower border of the symphysis pubis anteriorly and the ampulla of the rectum posteriorly. It is conical in shape and presents a base, an apex, and an anterior, posterior, and 2 lateral surfaces.

The anterior surface is connected to the pubic bone by the puboprostatic ligament. The urethra emerges from this surface above and in front of the apex of the gland. Inferolateral surfaces (one on each side):

Structures inside the prostate

Lobes of the prostate 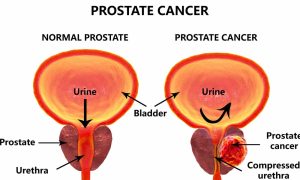 Histological structure of the prostate

It is composed of the following

Histologically and clinically, the prostatic acini are arranged into 3 concentric layers (zones) as follows:

In older men, the precipitation of the secretory material occurs inside the lumen of some acini forming lamellated structures which may become calcified.

Functions of the prostate gland

Benign enlargement of the prostate (Benign prostatic hyperplasia (BPH) is common in men older than 50 years (senile enlargement). It is present in about 95% of men above 70 years of age. Prostatic acini of mucosal and submucosal glands are involved in this disease.

The median lobe of the gland enlarges upward and encroaches within the sphincter vesicae, located at the neck of the bladder, The leakage of urine into the prostatic urethra causes an intense reflex desire to micturate, The enlargement produces a distortion of the urethra so that the patient experiences difficulty in passing urine and the stream is weak.

The enlargement of the uvula vesicae (owing to the enlarged median lobe) results in the formation of a pouch of stagnant urine behind the urethral orifice within the bladder. The stagnant urine frequently becomes infected, and the inflamed bladder (cystitis)) adds to the patient’s symptoms.

The malignant prostatic tumor is the second most common cancer in men. Prostatic acini of the outer group are involved in this disease.