Synaptic transmission is the process by which one neuron communicates with another, The information is passed down the axon of the neuron as an electrical impulse known as an action potential, When the action potential reaches the end of the axon it needs to be transferred to another neuron or tissue, The synapse permits a neuron (or nerve cell) to pass an electrical or chemical signal to another neuron or to the target effector cell in the nervous system, Synapses are important to the transmission of nervous impulses from one neuron to another. 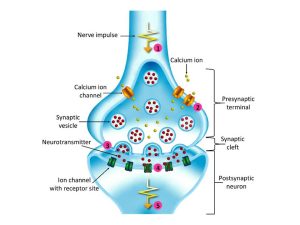 At a synapse, impulses are conducted only in one direction from the presynaptic to the post-synaptic neuron and never in the reverse direction.

When an impulse reaches the presynaptic terminals, there is an interval of, at least, 0.5 millisecond before the response is obtained in the postsynaptic neuron. This time is needed for the release of the neurotransmitter, its diffusion across the synaptic cleft, its binding to the post-synaptic receptors, Na+ influx to produce the EPSP, and summation of the EPSPs to the threshold value.

Repetitive stimulation of the presynaptic fibers at a rapid rate, leads at first to maximal discharge from the postsynaptic neurons, but with elapse of time, such postsynaptic discharge gradually decreases. This is known as fatigue of synaptic transmission and it is due to exhaustion of the neurotransmitter stores in the synaptic knobs. Synaptic fatigue can serve as a protective mechanism for preventing excess neuronal activity e.g. cessation of an epileptic fit which would otherwise be fatal.

Synaptic plasticity is the ability of the synapse, between two neurons to change in strength in response to either use or disuse. i.e. synaptic conduction can be strengthened or weakened on the basis of past experience, These changes are of great interest because they represent forms of learning and memory; these changes could be in the form of:

It is a decrease in response to a stimulus when that stimulus is presented repeatedly, Habituation is a form of negative memory.

There is a gradual decrease in the postsynaptic response with repeated presynaptic stimulation. It is due to less release of neurotransmitters from the presynaptic terminals as a result of reduction of the intracellular calcium.

It is an enhanced response to a stimulus after the presentation of another intense or noxious stimulus. For example, an animal responds more vigorously to a mild tactile stimulus after it has received a painful pinch.

Glutamate has 2 types of inotropic receptors:

The events leading to long term potentiation in the cells of the hippocampal formation can be summarized as follows:

This type of memory is typically acquired without conscious effort for recall and guides behavior unconsciously.

Implicit memory is mainly automatic, it is slowly acquired, through repetition over many trials and practice. It is less likely to be forgotten e.g you don’t forget how to ride a bike or play tennis once learnt.

This type of memory involves conscious retrieval of previous experiences as well as conscious recall of facts. It can be further classified into:

This type of memory is highly flexible; multiple pieces of information can be linked and associated under different circumstances. It is easily acquired and can be forgotten.