The pericardium is formed of two parts:

It is conical in shape. Its base lies on and attached to the central tendon of the diaphragm and its apex is directed upwards surrounding the big vessels. Anteriorly, it is attached to the sternum by two Sterno-pericardial ligaments. Posteriorly, it is related to descending aorta and oesophagus. Function it prevents over-distension of the heart.

It is formed of two layers, which are continuous with each other. The outer parietal layer lines the fibrous pericardium and the inner visceral layer covers the heart. this continuity between the two layers takes place at the points where the major blood vessels enter and leave the heart. Between the two layers is the pericardial cavity, which is a potential space that contains a small amount of fluid that facilitates the movement of the heart.

Sinuses of the serous pericardium

These are recesses in the serous pericardium in relation to the heart and its great vessels. 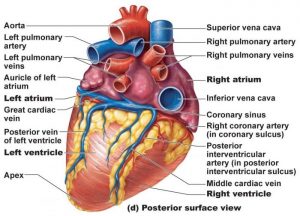 Development of the heart

Origin: From the mesoderm of the cardiogenic plate at the 3rd week.

Development: It starts by the formation of two heart tubes each has cranial and caudal ends.

Two constrictions appear in this tube dividing it into three chambers externally, those chambers are bulbus cordis cranially, ventricle caudal to it, and atrium caudal to the ventricle.

Development of the sinus venosus

The sinus venosus is a large quadrangular cavity, which precedes the atrium on the venous side of the embryonic heart, It receives venous blood from the right and the left horns, Again, each horn receives three veins: umbilical, vitelline, and common cardinal veins.

The sinus is widely connected to the atrium and this orifice is called the Sino-atrial orifice. This orifice has two valves: right and left valves. These two valves fuse cranially forming septum spurium. The venous blood will shift from the left side to the right, so the left horn will decrease in size and the right horn will increase in size.

It has right and left leaflets,

The crista terminalis forms the line between the rough and the smooth part of the right atrium.

Development of the right atrium

It is formed of the parts:

Development of the left atrium

It is formed of two parts:

The proliferation of the mesoderm in the atrioventricular and conotruncal regions (in the middle of bulbus cordis) leads to the formation of endocardial cushions.

Development of the interventricular septum

Development of muscular part: Initially there is a single ventricle connected cranially to both bulbus cordis and atrium. A thick muscular ridge develops in the caudal end of the ventricle. This ridge grows cranially forming the muscular part of interventricular septum.

Development of membranous part: This part is designed to close the interventricular foramen. It is formed by the proliferation of the following:

Development of the interatrial septum

At the end of the 4th week, a sickle-shaped crest appears in the root of the common atrium. This partition called septum primum. The two ends of this septum grow caudally to reach the endocardial cushions. The septum primum has an opening below it; called foramen primum.

The right ventricle is formed of smooth part and rough part

The left ventricle is formed of smooth part and rough part.

Development of aorta and pulmonary trunk

A spiral septum develops in the truncus arteriosus & distal part of bulbus cordis, separating this part into 2 canals, the pulmonary trunk & aorta. This septum fuses with the bulb-ventricular cushions. There is triple relation between the pulmonary trunk and ascending aorta.

Defect in the septa

Abnormalities in the truncus arteriosus

There is an absence of the anterior thoracic wall, thus the heart exposed partially or totally outside the thorax.

The apex of the heart lies on the right side. It may be associated with situs inversus.

Abnormalities in the number of chambers