The heart pumps blood around your body, It delivers oxygen and nutrients to the cells and removes waste products, It consists of four chambers: two upper chambers called the right and left atria (singular: atrium) and two lower chambers called the right and left ventricles, there are valves between the atria and ventricles that make blood flows in one direction through your heart.

External feature of the heart

Position of the heart: The heart is present in the middle mediastinum.

Shape of the heart: The heart is pyramidal in shape. It has an apex and a base. To place the heart in the normal anatomical position, you should place the base posteriorly and the apex should be directed forwards, downward, and to the left.

Surfaces of the heart

The sterno-costal surface of the heart

The sterno-costal surface is formed by the 4 chambers of the heart but mainly by the right ventricle. This surface is related to body of the sternum and costal cartilage, sternocostalis muscle, anterior borders of lungs and pleura, internal thoracic vessels, sternopericardial ligaments and thymus gland (or its remains). This upper border is hidden by the ascending aorta and the pulmonary trunk.

There are two grooves in the sterno-costal surface:

It contains the anterior interventricular artery and the great cardiac vein.

Posterior surface (base) of the heart

Borders of the heart 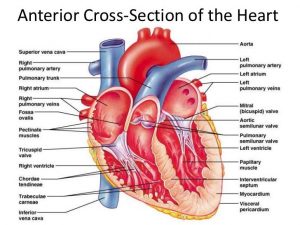 Valves of the heart

Chambers of the heart

It receives venous blood from the entire body except that of the pulmonary veins.

The cavity of the right ventricle is formed of an inflow tract and outflow tract.

Inflow tract: The right ventricle receives venous blood from the right atrium via the tricuspid valve. It has the following features:

Outflow tract: The blood then passes from the right ventricle through the pulmonary trunk via the pulmonary semilunar valve to go to the lungs.

It allows the passage of oxygenated blood from the left atrium to the left ventricle.

Inflow tract: Blood enters the left ventricle from the left atrium through the mitral valve and inflow tract and outflow tract: (bicuspid valve).

Outflow tract: Then the blood is pumped out from the left ventricle to the aorta through the aortic valve. The smooth outflow part is called the aortic vestibule.