Elbow joint is the joint between the upper and lower parts of the arm. It has prominent landmarks such as the olecranon, the elbow pit, the lateral and medial epicondyles, and the elbow joint. It is the synovial hinge joint between the humerus in the upper arm and the radius and ulna in the forearm which allows the forearm and hand to be moved towards and away from the body.

The elbow joint includes three different portions surrounded by a common joint capsule. These joints are between the three bones of the elbow, the humerus of the upper arm, and the radius and the ulna of the forearm, The elbow name in Latin is cubitus, the word cubital is used in some elbow-related terms, as in cubital nodes for example.

Type of joint: Synovial, Uniaxial, and Hinge. Articular surfaces: The elbow joint is a composite joint formed of 2 parts:

Synovial membrane lines all the structures inside the capsule of the elbow joint except the articular cartilage. Inferiorly, it is continuous with the synovial membrane of the superior radioulnar joint. 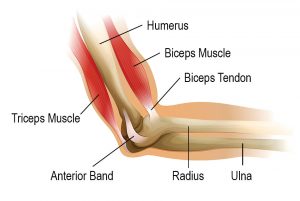 Movements of the elbow joint

It is a fibrous joint between the radius and ulna where both bones are connected by an interosseous membrane. The fibers of this membrane are directed downwards and medially from radius to ulna. Its function is to absorb the shock transmitted from the hand through the wrist joint, from radius to ulna, then partly transmits it to the elbow.

It is a uniaxial, pivot synovial joint between the head of the ulna and the ulnar notch of the radius. It has the same movements of the superior radioulnar joint.

Supination is the anatomical position of the forearm and is characterized by:

Pronation is when the radius rotates crossing the ulna, thus it is characterized by:

The joint is a Biaxial joint, so it moves around two axes. The movements are:

Small Joints of the Hand

Blood vessels of forearm & hand, Veins and Lymphatics of the upper limb