Throughout the fetal stage of development, the maternal blood supplies the fetus with O2 and nutrients and carries away its wastes. These substances diffuse between the maternal and fetal blood through the placental membrane. They are carried to and from the fetal body by the umbilical blood vessels. 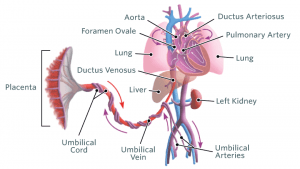 This mixture moves into the left ventricle and is pumped into the aorta to supply the brain & upper limb. Deoxygenated blood of the superior vena cava enters the right atrium also and then passes to the right ventricle to the pulmonary trunk.

As a result of this connection, the blood with a relatively low O2 concentration (superior vena caval blood) bypasses the lungs & runs in the descending aorta. Some of it is carried by the branches of the aorta to the lower parts of the body; The rest passes into the umbilical arteries (arise from the internal iliac arteries) to the placenta.

Changes of fetal circulation after birth (in the newborn)

In addition, an increased volume of blood returning from the lungs through the pulmonary veins to the left atrium, which increases the pressure in the left atrium. The increased left atrial pressure and decreased right atrial pressure (due to decreased pulmonary resistance) forces blood against the septum primum causing the foramen ovale to close. This action functionally completes the separation of the heart into two pumps–right and left sides of the heart.

The closed foramen ovale becomes the fossa ovalis. The ductus arteriosus, which connects the pulmonary trunk to the systemic circulation, closes off within 1-2 days after birth. Once closed, the ductus arteriosus is replaced by connective tissue and is known as the ligamentum arteriosum.