The lungs can be expanded & contracted in two ways; By downward and upward movement of the diaphragm to lengthen or shorten. By elevation and depression of the ribs to increase and decrease the transverse and anteroposterior diameters of the chest cavity.

In normal quiet breathing, inspiration is an active process due to the contraction of inspiratory muscles, but expiration is a passive process.

Normal resting inspiration is brought about by contraction of the main muscles of inspiration as:

By contraction of the diaphragm and external intercostals, the chest cavity is expanded in all dimensions, leading to expansion of the lungs as well. The pressure inside the lungs falls down, and the air is drawn into the lung (inspiration).

Forced inspiration: In addition to the contraction of the diaphragm and external intercostal muscles, other accessory muscles of inspiration come into action as: 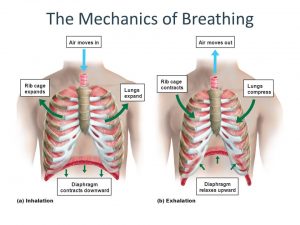 Normal quiet expiration is passive. During expiration, the inspiratory muscles simply relax. The elastic recoil of the lungs, chest wall, and abdominal structures, as well as the drop of the thoracic cage by its weight, compress the lungs and expel the air outside. The thorax returns back to the resting expiratory level (mid-thoracic position).

Forced expiration, as during exercise or voluntary hyperventilation, is active, The elastic forces are not powerful enough to cause the necessary rapid expiration, so that extra force is achieved, mainly by contraction of the expiratory muscles. The most important muscles of expiration are:

Pressure changes during the respiratory cycle

There are three pressures responsible for the movement of air in and out of the lungs. These pressures are intrapleural pressure (IPP), intraalveolar or intrapulmonary pressure (IAP), and transpulmonary or distending pressure.

There are not attachments between the lung and the walls of the chest cage, except where it is suspended at its hilum from the mediastinum. Instead, the lung “floats” in the thoracic cavity, surrounded by a thin layer of fluid (pleural fluid) that lubricates the movement of the lungs within the cavity.

Furthermore, continual auction of excess fluid into lymphatic channels maintains a slight suction between the visceral and the parietal pleural surfaces. Therefore, the lungs slide easily on the chest wall, but resist being pulled away from it, in the same way, that two moist pieces of glass slide on each other but resist separation.

Normally, no air exists in pleural space but rupture of the lung by a penetrating wound can cause air (pneumothorax), fluid (hydrothorax), blood (haemothorax), or pus (pyothorax) to enter leading to lung collapse.

It is the pressure in the “potential space” between the lungs and chest wall (pleural space). It is a negative pressure (subatmospheric).

Causes of negativity of IPP

The normal pleural pressure at the beginning of inspiration is about 5 cm H₂O, which is the amount of suction that is required to hold the lungs open to their resting level. Then during normal inspiration, the expansion of the chest cage pulls the surface of the lungs with still greater force and creates a still more negative pressure down to an average of about -7.5 cm H₂O.

These relations between pleural pressure and changing lung volume are demonstrated in showing in the bottom panel the increasing negativity of the pleural pressure from -5 to -7.5 cm H₂O during inspiration and in the top panel an increase in lung volume of 0.5 liter. Then, during expiration, the events are essentially reversed.

During expiration, opposite changes occur, The lung alveoli collapse before the air is expelled from them, The alveolar pressure rises to about +1 cm H₂O, This forces the 500 ml of inspired air out of the lung during 2-3 seconds of the expiration. By the end of expiration, the pressure drops gradually and becomes atmospheric again.