Gram-negative bacilli are a large group of non-spore-forming bacteria adapted to a wide range of habitats/niches. A large number of genera are inhabitants of the large intestine (e.g. E. coli, Proteus, Klebsiella), some are adapted to the respiratory tract (e.g. Klebsiella); others live in soil and water (eg. Pseudomonas, Acinetobacter, Vibrios). It is important to distinguish between true pathogens (e.g. Salmonella, Shigella) and opportunists (e.g. Pseudomonas, Acinetobacter).

Klebsiella pneumoniae is present in the respiratory tract and feces of about 5% of normal individuals. It causes about 3% of bacterial pneumonias. It occasionally produces urinary tract infections and hospital-acquired infections. 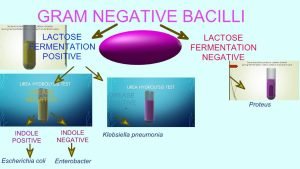 Commensal bacteria are present in the healthy gut. Proteus species produce infections when the bacteria leave the intestine:

Proteus vulgans in particular is an important nosocomial pathogen.

Pseudomonas aeruginosa is the most important species. It grows readily on many types of media including ordinary media. Almost all strains characteristically produce on agar-diffusible pigments. It usually produces a sweet grape-like odor.

It is widely distributed in nature, soil, water, and sewage and it is commonly present in moist environments in hospitals. It can colonize the normal human intestine, upper respiratory tract and skin as a saprophyte. It only causes disease in humans with abnormal host defense, hence it is called an opportunistic pathogen.

Acinetobacter is a group of Gram-negative bacilli, that grow as non-lactose fermenting colonies on MeConkey’s ager, Commonly found in the environment, like in soil and water.

Acinetobacter is frequently isolated in nosocomial infections) and is especially prevalent in intensive care units), where both sporadic cases and epidemic and endemic occurrences are common.

It is a frequent cause of hospital-acquired pneumonia, especially late-onset, ventilator-associated pneumonia. It can cause various other infections, including skin and wound infections, bacteremia, and meningitis.