The larynx protects the lower airways, It facilitates respiration, It plays a key role in phonation, It directs air into the lungs to breathe, It directs food into the esophagus on its way to the stomach, It can create a sound for the voice, vocal cords can open to allow breathing; close to protect the windpipe when swallowing, and vibrate to give voice.

The larynx is the organ of phonation (voice production) in addition to its respiratory function (airway). It is formed of a group of cartilages connected by muscles, ligaments, and joints). The larynx lies below the hyoid bone in the midline of the neck at the level of vertebrae.

Sensory nerves to the larynx are derived from the internal branch of the superior laryngeal nerve (iSLN) and the recurrent laryngeal nerves (RLNs); both are branches of the vagus nerve. The RLN innervates all intrinsic laryngeal muscles except the cricothyroid muscle, which is innervated by the external division of the SLN (eSLN). 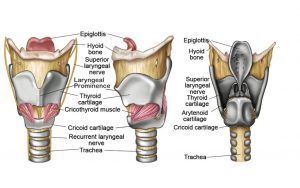 Cartilages of the Larynx:

Inlet of the larynx

The cavity of the larynx:

The cavity of the larynx is divided into three compartments by two pairs of folds that extend from before backwards, The upper folds called vestibular folds (false vocal cords) and the lower folds are called vocal folds (true vocal folds). The compartments are:

Muscles of the Larynx:

I. Muscles acting on the laryngeal inlet:

A: Muscles closing the laryngeal inlet:

No muscles produce an opening of the laryngeal inlet, it is only opened by the elastic recoil of the epiglottis.

A: Muscles producing abduction of the vocal cords:

Posterior crico-arytenoid is the only abductor to the vocal cords. It extends from the posterior surface of the lamina of the cricoid cartilage to the muscular process of the arytenoid. Actions: Abduction of the vocal cords.

B. Muscles producing adduction of the vocal cord:

B. Venous drainage: It drains its venous blood into the corresponding superior and inferior thyroid veins respectively.